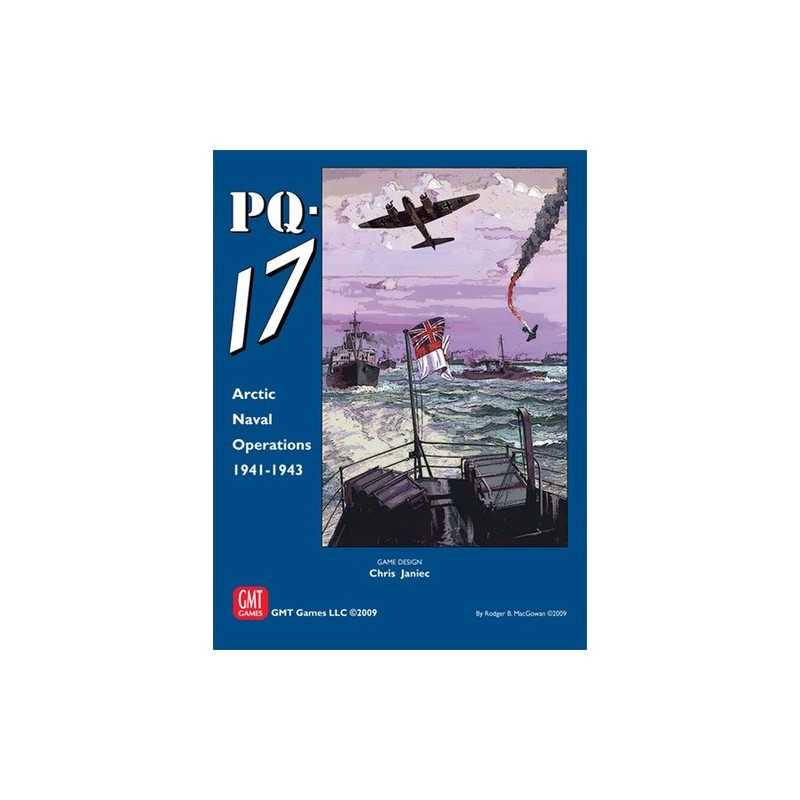 PQ-17 is a 2-player game of World War II air-naval operations in the Barents and Norwegian Seas, where the Allied player strives to pass convoys to and from north Russia in the face of appalling weather and determined opposition from his Axis opponent. 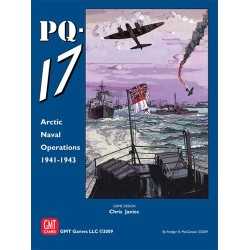 PQ-17 is a 2-player game of World War II air-naval operations in the Barents and Norwegian Seas, where the Allied player strives to pass convoys to and from north Russia in the face of appalling weather and determined opposition from his Axis opponent.

PQ-17 is a 2-player game of World War II air-naval operations in the Barents and Norwegian Seas, where the Allied player strives to pass convoys to and from north Russia in the face of appalling weather and determined opposition from his Axis opponent. PQ-17 highlights the impact of reconnaissance, fuel, and the extreme climate without the drawbacks of a double-blind system or tedious bookkeeping.

Each of the 1" square ship counters in the game depicts an individual capital ship or cruiser or a group of smaller ships, submarines, or merchant vessels. Virtually every vessel that sailed arctic waters in 1942 is included, along with others that fought (or might have) in key actions. Counters are formatted much like the units in traditional block wargames, allowing step reduction to show damage or reduced numbers without cumbersome markers or rosters. These large counters never appear on the map, however; they remain off-map on players' Task Force Displays until battle is joined.

>Instead, players maneuver blocks on a mapboard stretching from Greenland and Ireland to Kiel and the Kara Sea. Each block is a force of submarines or surface ships, its identity hidden from the enemy player until it is located by a successful search and the block is turned up. It may represent one ship or one hundred - or none at all, as it may be a dummy. Reconnaissance is critical, as you must locate the enemy in order to attack him. Cards are used to resolve searches quickly and efficiently: a successful search yields intelligence of varying accuracy, while failure to relocate the enemy in a timely manner results in lost contact and generation of another dummy.

Players must also cope with fuel restrictions, reflecting limited endurance (particularly for destroyers) and Axis shortages. Simple rules and the use of markers on the Task Force Displays preclude the need for record keeping while preventing unrealistic freedom of action.

To show the key role of air power in the campaign, PQ-17 also includes over 100 air units. Circular counters represent RAF Coastal Command and Fleet Air Arm squadrons and Luftwaffe Staffeln and Gruppen that participated in naval operations in the theater, as well as selected air defense units. Many VVS air regiments are also included, along with the USAAF squadrons that defended Iceland.

Because the focus of the game is operational, battles are fought on an abstract Combat Display. Simple procedures and multiple Combat Results Tables reproduce historical levels of damage from all forms of combat: submarine attacks, antisubmarine warfare, bombing and aerial torpedo attacks, anti-aircraft fire, air-to-air combat, and naval surface actions.

PQ-17's environmental model is based upon historical meteorological and oceanographic records to accurately reflect the extreme conditions and their effects. Summer operations, conducted in round-the-clock daylight, play much differently than those undertaken in the near-total darkness of winter. The polar ice pack advances and ebbs with the seasons, varying the sea routes available and posing a hazard for naval forces venturing too close. And besides each other, players must also battle some of the worst weather in the world, potentially damaging their ships and affecting movement, searches, and combat.

PQ-17 features nine historical scenarios, including all the major actions of the campaign: the Fleet Air Arm torpedo attack on Tirpitz, the decimation of convoy PQ-17, the climactic battle of PQ-18, the Battle of the Barents Sea, and the 1943 Battle of North Cape. To add uncertainty, each side is subject to a special condition in every operation, which may impose additional requirements or restrictions - or afford additional opportunities - while remaining secret from the opponent. Just like their historical counterparts, Allied players can never be certain that the Germans will not attempt to break out into the Atlantic with one or more heavy ships, and Axis players must beware of a possible attack on Norway; both players may face conflicting priorities and demands that must be met with limited resources. In addition, a 1942 "random" scenario enhances replay value by further disguising starting forces and objectives. Each operational scenario can be played to conclusion in 3-4 hours, and for players seeking a richer experience, a 1942 campaign scenario reflects the challenges of continuing operations over the course of this key year.