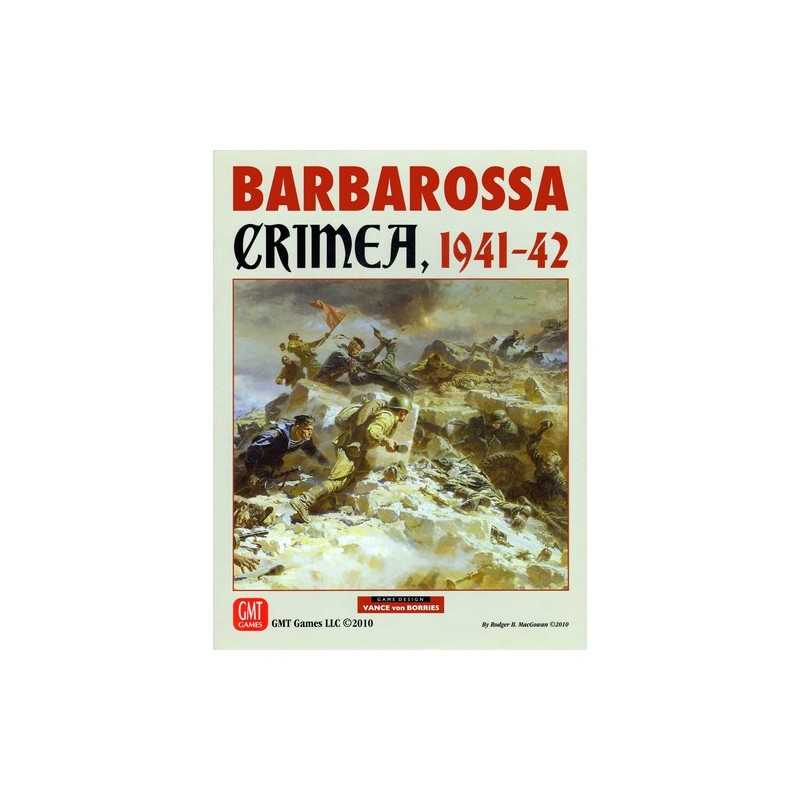 GMT is proud to present Vance von Borries’ sixth epic game in his award winning series of East Front games, Barbarossa: Crimea. This is a two-player operational level game depicting the battles in the Crimean peninsula of the Soviet Union during 1941 and 1942. 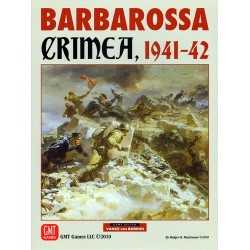 GMT is proud to present Vance von Borries’ sixth epic game in his award winning series of East Front games, Barbarossa: Crimea. This is a two-player operational level game depicting the battles in the Crimean peninsula of the Soviet Union during 1941 and 1942.

GMT is proud to present Vance von Borries’ sixth epic game in his award winning series of East Front games, Barbarossa: Crimea. This is a two-player operational level game depicting the battles in the Crimean peninsula of the Soviet Union during 1941 and 1942. Beginning in mid-October 1941 and ending in January 1942, it completes the year 1941 in this series of the German invasion of the Soviet Union. And it includes 1942 scenarios of the continued fighting in Crimea until the historical fall of the great Soviet naval fortress Sevastopol in July 1942.

THE GAME: This comprehensive game system was designed at a scale for divisions but it accommodates the many independent brigades, regiments, and special battalions that were also available for this campaign. These include units for rocket artillery, heavy artillery, armored trains, assault guns, engineers, Stukas, Sturmoviks, anti-aircraft guns, waffen SS, NKVD, militia, base units, naval units, and more. You have reinforcement options to tailor your army to fight a full campaign with many historical variables.

As we have indicated with each game, all games in this series share the same game mechanics. Veteran East Front Series (EFS) players will find much here that is familiar. Such mechanics include ranged artillery, air units for close support or interdiction, Soviet HQs, retreat or stand orders, weather, reaction movement, railroad movement, strategic movement, overruns, combined arms, fortifications, special supply situations, and more. Veteran players should be able to pick up game play right away, and for them we have clarified many game procedures. For those who are new to the series, examples of play will be found in the rules book as well as a Learning scenario to fully illustrate game play and some of the decision making for each battle.

All games of the EFS series are built to fit together side-by-side for possible combined play. We recognize that space is at a premium for some of you, so consider that all of the eight scenarios in this game require only one map or less; yes, just one map! Newcomers should try this game as a sample of the whole series.

Barbarossa: Crimea includes several special features not found with all EFS games. Since the game revolves around Sevastopol, we include a special inset map to depict in detail the fighting at that important naval fortress. Much gaming will directly involve the inset, so we have streamlined previous series rules dealing with an inset map. We have also streamlined the naval rules, effectively rebuilding them. This in turn allowed us to rebuild the Odessa scenario found with the Barbarossa: Army Group South game in this series. There, and later in Crimea, the Soviets used amphibious operations to move battle lines forward. If an amphibious operation is not going well, the Soviets could declare an Evacuation. At Sevastopol the German player will be using his super-heavy artillery, including the world’s largest artillery piece, Dora, historically seen in the final game scenario. The design notes include an essay on these wonder-weapons.

Barbarossa: Crimea challenges you to balance your attack and defense in each sector of the game map, regardless of scenario. Neither side has sufficient resources in either troops or supplies so the key to winning will be good game play and a sound plan. Can you do better than the titans that struggled for the Ukraine in the summer and fall of 1941?

THE SCENARIOS
1) Learning Scenario: The Tartar Ditch. The German 11th Army has just received orders to enter the Crimea but to do so it must first clear the narrow Perekop Isthmus. This was the first battle for the Crimea. This is a small scenario but it teaches important lessons in precise game unit positioning - exactly what one would expect for historical positional warfare.
2) Odessa: Hero City. This is a bloody example of siege warfare. The Romanian army shows exactly why it was so ill-suited for such an offensive, while the Soviets struggle to balance their forces from sector-to-sector and endure delays of reinforcements coming by sea. This rebuilds the scenario found in theArmy Group South game using new research and this game’s improved naval rules.
3) Crimea: The Road to Sevastopol. This begins in mid October 1941. The Germans almost certainly will break through the main Soviet defense line, so the Soviet player has to know when to break away from the action and run back to fresh prepared positions, a tactic typical of game play in other series games. The German player also chooses secret victory conditions. He will either drive south to Sevastopol or southeast to Kerch, forcing the Soviet to balance his defense of both.
4) Sevastopol: The First Battle. With the Germans committed to Sevastopol, can the Soviet divert enough German attention elsewhere to save the fortress? In the meantime, the deeper the German pushes into the Sevastopol inset map, the better his chances for long-term victory.
5) Crimean Campaign. The campaign scenario puts scenarios 3 and 4 together to feature a punch and counter-punch game strategy. The Soviet player relies on his naval units to rapidly shift the threat. The German relies on his infantry to consolidate gains.
6) Kerch: The Party Boss Attack. Ever wonder why Mandated Attacks exist in this game system? In the middle of winter 1942 one of Stalin’s cronies thought the armies holding the Kerch Peninsula in the Crimea were not sufficiently motivated to defeat the fascists. He personally bullied the local Front commander into do-or-die attacks. This scenario exemplifies the insanity of political expectations trumping battlefield realities. Can you find a weakness in the Axis line?
7) Kerch: Operation Trappenjagd. Now it is the German turn to attack in the Kerch Peninsula but their champion knows how to attack. This is a brilliantly planned German attack, one that pays handsome dividends. Can you repeat Manstein’s success? As the Soviet can you defeat Manstein’s attack?
8) Sevastopol: Operation Storfang. This is the last picture show in the Crimea and it will be bloody. Truly, the best is saved for the last as the Soviets fight for every last hill, fort, and farmhouse. They went down fighting and their sacrifice earned them great honor in the history books. It was close. The German plan of offensive was sound and it met each challenge the Soviets posed. Can you duplicate Manstein’s cold calculations and earn your marshal’s baton?