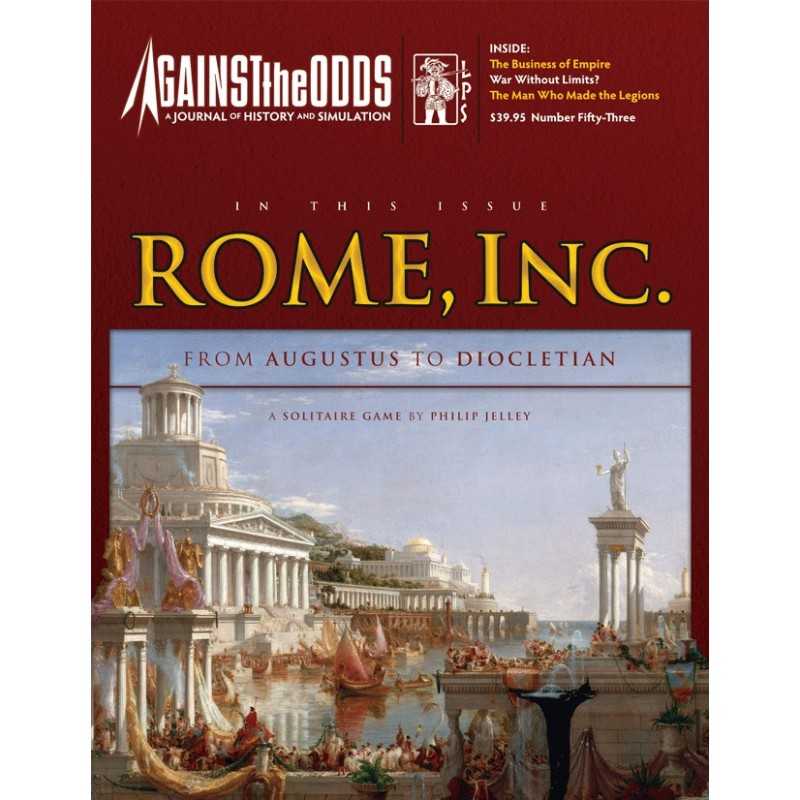 After hostile takeovers of such competitors as Carthage, Greece, and Gaul, Rome has been incorporated into an empire. As leader of this vast conglomerate, you'll need to raise new forces (hiring), undertake prestige projects (public relations), please the mob (shareholders), or even set aside a reserve for a rainy decade or two. Coupling military expansion with careful administration.

Game description
ROME, INC. by designer Philip Jelley, is a solitaire game of the Roman Empire. The premise is that the player runs the operations of the Roman Empire like a business, but with a bit more blood, bread and circuses. After hostile takeovers of such competitors, like Carthage, Greece and Gaul, Rome has been incorporated into an empire, ready to monopolize the ancient world. But this requires the efforts of many, some who might be in it for themselves. As the player, you are not “the Emperor” - you select and replace emperors, and all the statesmen under him.

ROME, INC. begins with the “startup” of the Roman Empire under Augustus in 27 BCE to Diocletian in 286 CE. You’ll control the workings of the empire throughout, although you can pick four distinct “starting points” (27 BCE, 70 CE, 138 CE and 222 CE) and run scenarios of any length you like, depending on your corporate acumen and endurance. Each turn represented 5-10 years, with 10 turns in each of the four scenarios.

Historical statesmen are rated for their military and administrative talents, popularity, and skill at intrigue, and each has a special ability. Every turn sees crises and challenges that the player must deal with - much like a modern CEO. Increase “stock” by expanding the empire and triumphing over enemies, like the “barbarians at the gate” or internal agitators. But can your management maintain a good Return on Investment?

The map consists of provinces grouped into military commands such as Britannia and Syria, each commanded by a governor. Provinces may be controlled by barbarians, allies or insurgents, which can be conquered and developed into peaceful tax-payers. Beyond these are the homelands from where barbarian wars and enemy leaders pillage their way from province to province until defeated.

You decide where to allocate resources (capital spending), raise new forces (hiring), undertake prestige projects (public relations), pleasing the mob (shareholders), or even setting aside a reserve for a rainy decade or two. You’ll need to blend military expansion with careful administration, as well as intrigue, making the most of what you have each turn, just like any modern-day business.

ROME, INC. will give you a new perception of how war is a cost, business is a benefit, and empire is somewhere in between. It’s up to you to find a balance.