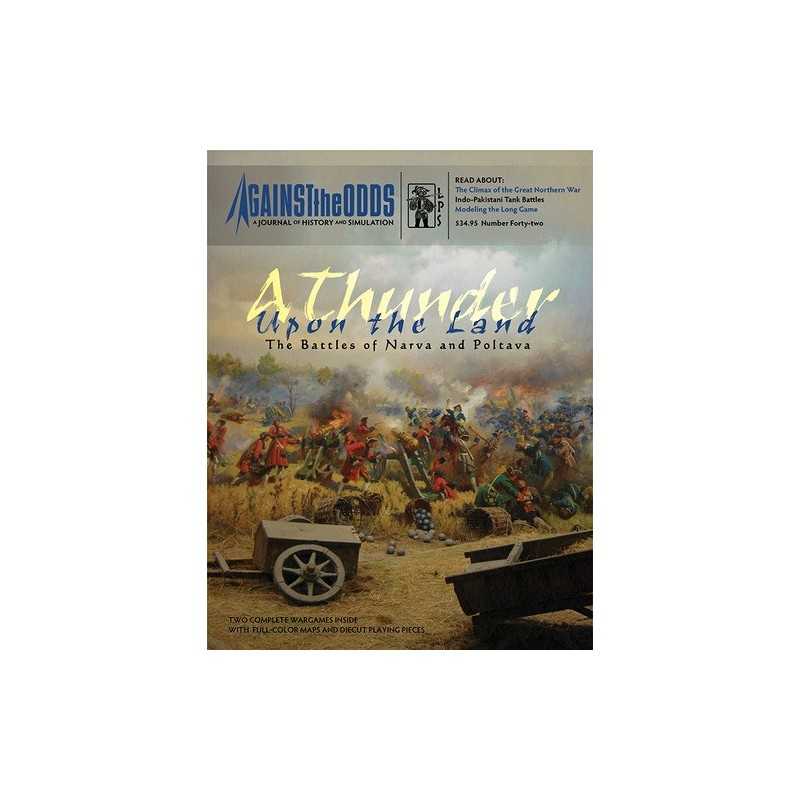 Whether the blame can tagged to Swedish expansionism or Peter the Great’s desire for that warm-water capital city and “window on Europe,” the clash was a seemingly inevitable clash over who would own what in northern and eastern Europe and what shape Poland would take (if any). When the war started, it resembled something Frederick the Great would face, a “everyone against one country” conflict that saw Russia joined by Denmark/Norway and a Saxon-Poland-Lithuania combination, with others joining later, all seeking to take advantage of the 18-year old Charles XII—who was perceived to be weak and inexperienced. Like Frederick, he would parry multiple invasions and survive. Unlike Frederick, he would launch a serious invasion deep into Russia…and fall from power.

A Thunder Upon the Land looks as the Sweden vs. Russia portion of this war, with the two battles that rather started and finished the conflict.

The Battle of Narva took place in 1700, as Russia and a Saxon-Polish contingent aimed to push Sweden out of the Baltic, with the Saxons threatening Riga and the Russians besieging Narva. But it was November, and Peter left his army feeling secure that his 40,000 men could bottle up and capture the 2500 Swedes holding the city. Charles rushed to relieve the city with an army that was well-drilled and well equipped, but numbered only about 8000 men. So, including the troops in the city, he would be attacking at something like 1-4 odds. And attacking in a blizzard. But the surprise and wretched weather worked to his advantage, and virtually the entire Russian army was killed or captured, along with their artillery and equipment. It was Russia’s finest force at the time, and an immediate invasion by Sweden might well have succeeded. But there was Riga and the Saxons to consider, and Charles let the moment pass.

Three years later, having knocked the Saxons out of the war, Charles turned again to Russia, who had surprised Europe by founding St. Petersburg on what was then still Swedish territory. Charles aimed for Moscow, and this time, it was a Swedish army that vanished from the map.

A Thunder Upon the Land brings you both battles of Narva and Poltava, with full color maps and over 250 die-cut counters.

Each turn represents about one hour of real time and each hex represents about 500 yards. This game uses chit-draw for wing activation and allows players to make tactical choices like forming squares or deciding if their dragoons will press home charges, with optional rules for volley fire and desperation attacks.

Can you, as Charles XII, maintain Sweden’s status as the rising power in Europe? Can you, as Peter I, defeat the invaders and open the great city you gave your name to? The choices are yours as you refight the battles of Narva and Poltava.