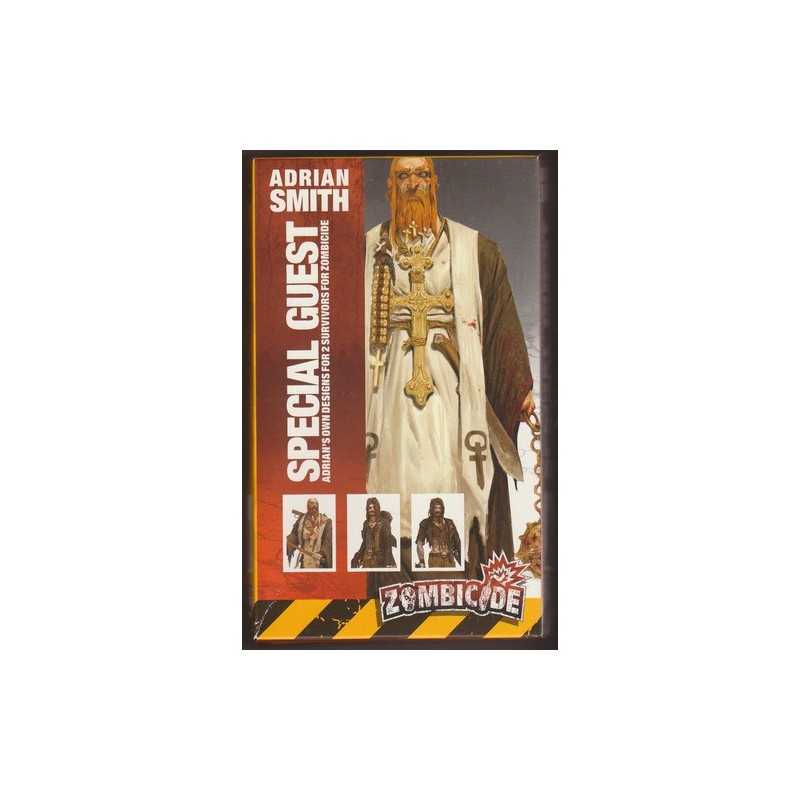 This expansion includes two survivors and their Zombivor counterparts both designed by Adrian Smith.

This expansion includes two survivors and their Zombivor counterparts both designed by Adrian Smith.

Adrian Smith (born 1969 in England, United Kingdom) is a illustrator/concept designer living in Scotland. Best known for his work with Games Workshop and numerous similar companies, Adrian has also done concept design work for computer games companies such as THQ and EA. Other credits include a short comic series in France written by Pat Mills and book illustrations alongside renowned artists from around the world. Recently Adrian has been self publishing, the first project being his art book "Illuminations", and plans are in motion for a series of comics early in 2013. In addition to these personal projects, he still finds time for freelance work with various companies."

Padre Johnson led his small flock during the early days of the apocalypse, until they were finally, inevitably overrun. The Padre was the only survivor, miraculously emerging unscathed from the ruins of his church. Now he spreads the good Word amongst the survivors, albeit slightly unhinged from his narrow escape from death. Still he's handy with a shotgun and a quick prayer, and is always a welcome sight.

Bones is (or was) the lead guitarist of a heavy metal band famous the world over... but lately things have been getting a little stale. World tours, sell out stadiums, groupies, even the drugs and booze just weren't that fun anymore. In his darkest and most sober moments, Bones knew he hadn't really done anything creative for the best part of a decade - just rehashing the same old thing over and over....

The zombie apocalypse changed all that of course, and ironically Bones is now incredibly inspired to create songs about death, blood and liberation! Unfortunately, electricity is hard to come by so he's perfecting his strictly acoustic metal for now.