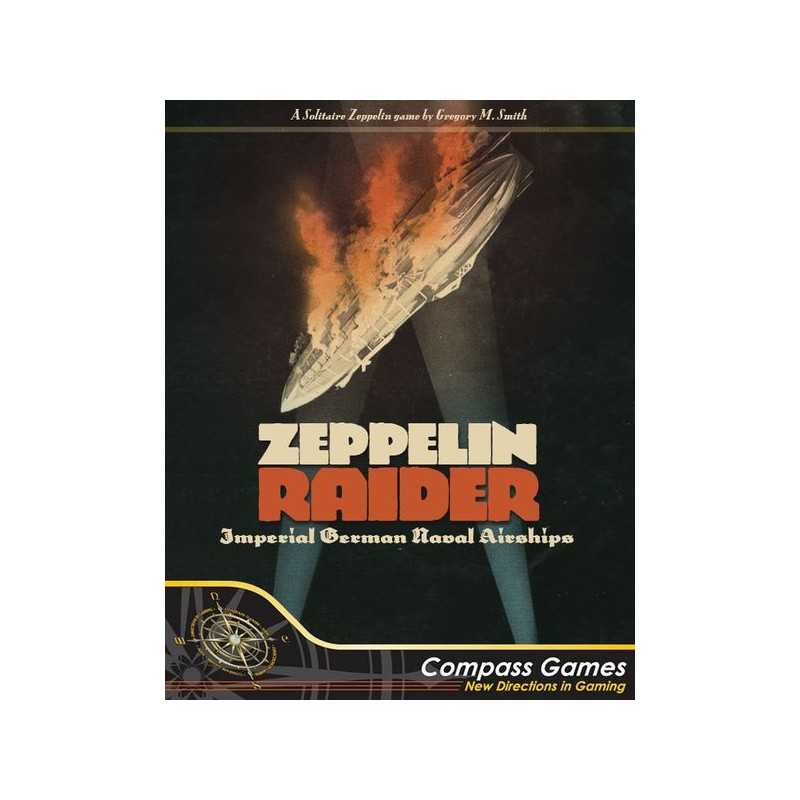 Zeppelin Raider: Imperial German Naval Airships is a solitaire, tactical level game placing you in command of one of several models of WWI Zeppelin dirigibles as part of the Imperial German Navy. Your mission is to destroy as much English war facilities as possible via bombing raids, or to conduct reconnaissance over the North Sea... 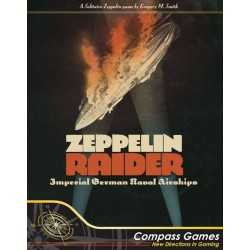 Zeppelin Raider: Imperial German Naval Airships is a solitaire, tactical level game placing you in command of one of several models of WWI Zeppelin dirigibles as part of the Imperial German Navy. Your mission is to destroy as much English war facilities as possible via bombing raids, or to conduct reconnaissance over the North Sea...

Zeppelin Raider: Imperial German Naval Airships is a solitaire, tactical level game placing you in command of one of several models of WWI Zeppelin dirigibles as part of the Imperial German Navy. Your mission is to destroy as much English war facilities as possible via bombing raids, or to conduct reconnaissance over the North Sea...and still survive and come home. Zeppelin Raider is based on the popular Hunters game system by Gregory M. Smith that delivers a tense and nail-biting narrative throughout the course of play.

"England shall be destroyed by fire!" – line from a popular German children's song, circa WW1.

So hoped Germany after the initial successes of World War 1 turn into a quagmire and stalemate in the trenches...and now, a new weapon arose, capable of crossing the channel with impunity and bringing destruction to England. Count Ferdinand von Zeppelin's brainchild, the lighter-than-air rigid airship, came to the forefront of new weapons in this most brutal of wars. It took a certain amount of courage to go to war riding over a half million cubic feet of flammable gas, but there were no shortage of volunteers. Despite the arguable effectiveness of the world's first strategic bombing campaign, it without question tied up a huge amount of resources that England could barely afford, and for that reason alone was worthwhile. One hundred and seventy seven Zeppelin sorties pummeled England during the war, with high explosive and incendiary bombs, which caused a strong British response. The Zeppelins finally lost the arms race to aircraft and explosive/incendiary bullets, however, and losses were grievous. Over half of the German Navy's airships were lost on combat missions, most of those in flames. It was not a job for the faint of heart.

Players will find it challenging to survive an entire tour from 1914 to 1918, at which time, if still alive, you will surrender at base, having done your part on the front lines. If desired, a player may start with a more advanced model of Zeppelin which may actually increase their chances to survive. You may start at any month/year you wish, but notice that some Zeppelins are available right away, but others are not available until later. Players may be reassigned to a newer model of Zeppelin under some circumstances, but typically will stay in the same airship until the end of game or until shot down in flames, sunk, or wrecked in a crash landing.

The object of the game is to conduct numerous missions which include two main types: Bombing missions are required to bomb a specific geographic location in England (London, for example), whereas Scouting missions are required to scout a specific location in the North Sea. Players are not limited by the mission parameters for success; as you may choose to bomb or successfully scout somewhere else. The success of each mission can result in promotion and crew advancement. Just as in the real war, the game system involves a great deal of chance (as was the case historically), but ultimate success rests on the decisions, you make during your career.

A strong historical narrative is presented without overly cumbersome or complex rules to memorize so the focus is always on game play and what critical decisions you will make during each mission. Rules cover mission selection, altitude adjustment and gas cell tracking, venting, emergency jettison, maximum altitude, dynamic lift, wind and weather effects, fuel management, bombing missions, aircraft and ship encounters, zeppelin damage, crew advancement, awards and promotion, reassignment to a newer ship, a special resupply mission to Africa, and much more!

This game is highly accessible to those familiar with The Hunters or Raiders of the Deep. While Zeppelin Raiders is designed as a solitaire gaming experience, additional options for play are provided for both multi-player gaming sessions and organized tournament play.