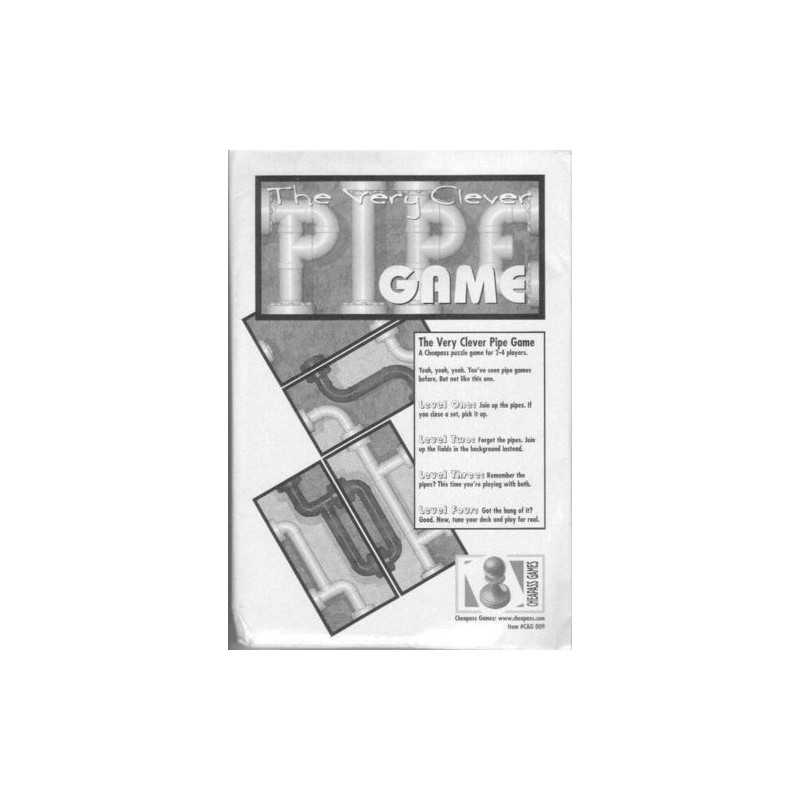 The Very Clever Pipe Game is another in a series of abstract strategy games from James Ernest and Hip Pocket Games. It was originally published as a 120-card envelope game in 1997, and returns now in a more compact and affordable form.

The Very Clever Pipe Game is unlike any pipe game you've seen before. We promise! In the basic game, each player has a different color of Pipes (either Black or White) and is trying to construct closed sets of his own. When you complete a set, you take those cards off the table, and whoever takes the most cards wins.

The rules of the game allow you to play cards anywhere on the table, even unconnected to the existing layout, as long as they conform to the existing grid. There are special rules for half-card sized holes (called "Pillars") and for deciding who takes the cards when two sets form at once.

Once you have played the basic Pipe Game, you can move on to version two: Fields. Every card has light and dark Fields which run behind the Pipes. In the Fields game you are building the board by the same rules, but instead of picking up Pipe sets, you pick up Fields of your own color that are completely surrounded by Fields of the opposite color.

In version 3, which is playable by up to 4 players, each player has either a Pipe color or a Field color, and each is trying to pick up sets of his own color. You can also play either of the two basic games with 4 players, by forming two teams of 2.

The Very Clever Pipe Game has 48 cards, including several cards that were not in the original edition. The deck is better balanced for Pipes vs. Fields than the original game, and there is also a slight tweak to the starting rules (players draw starting hands of 9 cards and discard 4). What's more, the artwork has been updated to reflect the sensibilities of the new millennium. Okay, not really. We just made the borders white instead of black.