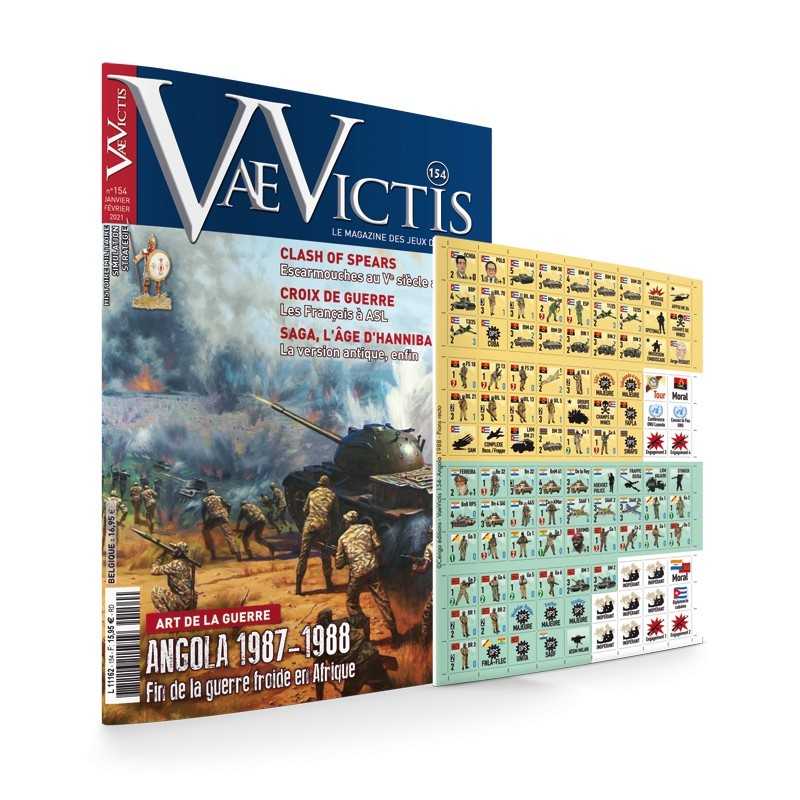 Vae Victis magazine is in French, but in each number you can find a whole wargame language independant with the English rules available from VAE VICTIS web site. VaeVictis 154 Special Issue including wargame "Angola 1987-1988" with die-cut counters.

The year 1987-1988 was a turning point in the war in Angola. Since 1975, a murderous civil war opposed two sides:  the government with the single party, the MPLA, supported by the Soviet Union and Cuba, and Jonas Savimbi’s UNITA, supported by the United States and the South African Republic. To break the stalemate, the government decides to launch operation “Greeting October” during the dry season. This operation would put an end of the conflict by seizing UNITA’s capital, Jamba, located in the southeastern corner of the country. But, they hadn’t counted on the armed South African forces (SADF) and their game-changing “modular” and  “hooper-packer” operations. Swept along the Lomba River, the government forces withdrew to the small town of Cuito Cuanavale where they were besieged for several months.
Faced with this situation, the Cuban government (and Fidel Castro) launches Operation “31st Anniversary” to push back the South African forces and ensure the survival of the regime. Without Moscow’s support, a great airlift was dispatched with the Cuban contingent of more than 50,000 men, enabling the city of Cuito Cuanavale to resist, the SADF to be pushed back beyond the Namibian border.
Playing the diplomatic card under the aegis of the UN, the situation was re-established. During the accords in New York in December 1988, the joint departure from Angola of the Cubans and the South Africans enabled the independence of Namibia. More long term, by weakening the politico-military apparatus, these accords opened the path at the end of Apartheid for Nelson Mandela to come to power.
Like Fidel Castro, will you succeed in exiting a war with honour and ensuring the survival of the government of the MPLA ? Will you succeed in ensuring your control over Angola and maintaining Apartheid in the South African Republic?