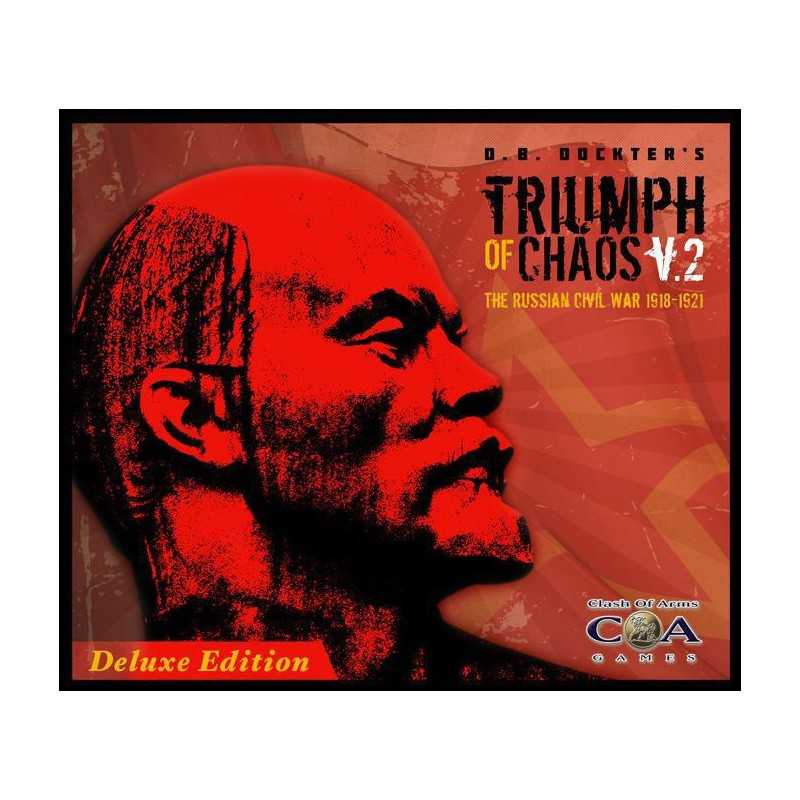 Triumph of Chaos: The Russian Civil War 1918-1921 v2 DELUXE! is a two-player card driven strategic board game wherein the players assume the roles of the RED (Communist Forces) and the WHITE (reactionary forces). This epic conflict resulted in the toppling of three centuries of Romanov rule and its replacement by a totalitarian communist ideology.

A World at War Third Printing

Triumph of Chaos: The Russian Civil War 1918-1921 v2 DELUXE! is a two-player card driven strategic board game wherein the players assume the roles of the RED (Communist Forces) and the WHITE (reactionary forces). This epic conflict resulted in the toppling of three centuries of Romanov rule and its replacement by a totalitarian communist ideology. Set against a backdrop of the vast and spectacular Russian countryside, only the Russian winter could surpass the brutality of the fighting. Belligerents included the various Russian republics, anarchist and independence movements, adherents of the old regime, foreign contingents of volunteers and the overt intervention of the Major Powers.
With Triumph of Chaos v2 DELUXE!, the original game published in 2005 has been enhanced to provide a richer playing experience (more Social Revolutionaries, eastern warlords and a gaggle of obscure personalities and entities), a bigger map (enlarged 40% and including the Trans Siberian rail line all the way to Vladivostok), better play aids and redesigned cards (setting the stage for more player angst). The basic structure of the original game is still there with three phases to a turn: Political (players compete to push or pull fractions to their side), Action (players alternate playing cards to move, fight, enact events and build up their armies) and Logistics (replacements and a variety of new intriguing game mechanics): Triumph of Chaos v2 DELUXE! remains the sine qua non of chaos, continuously shifting front lines and rich flavor.
Here’s what’s in the box: a beautiful 44’’ x 34” double map, 220 cards (action, leader, political decks), 3 sheets of counters (including approximately 400 military units, 40+ leaders and a bundle of other game tokens), rulebook & supplement, very helpful play aids and few game bits (wood and dice).

So, how does Triumph of Chaos v2 compare with v1 (which was published back in 2005 and then expanded in 2007 by the Comrades' Guide)? The categories of improvement:

More card angst/decision tension: Significant revisions to the Action Cards (the majority of them) to reflect learnings from new research and hopefully make the choices faced by each player more gut wrenching.
Invited the Socialist Revolutionaries to the party: The SRs now occupy a “buffer position” between RED & WHITE in the east as the game begins; making for a nail-biting opening. The SRs may go either way as governed by a track and play of both Political and Action cards with significant ramifications for both players.
Leader state: A few leaders now have an alternative “state” (ex: Kolchak: drug abuse, Mai-Mavesky: debauchery, etc), making them more unreliable than your usual wargame leader counter.
Far east part of the story added: Japan, Far-East warlords and red partisans are all now apart of play.
* A little less clunky game engine…

A few tweaks to the basic game engine: artillery, tanks and air are now simply “assets” that modify combat die rolls. A Resource Center mechanic now controls where replacements may be spent (much more reflective of historic constraints).
Infighting: Gameplay impacts the composition of each player’s in-fighting pool; changing the internal political dynamics that both players must manage.
Better Faction rules: A streamlining of the Ukraine and Poland rules. Nips and tucks to Makhno, West Ukraine and Finland.
* ..and improved kit & bits (game look & feel)

Doubled the map: Most of that is a result of simply “blowing up” the original map by 40% (for our tired/old eyes) and adding the Far East and Trans-Siberian railroad all the way to glorious Vladivostok.
Bigger counters: Armies & leaders are now represented by 1" x 1/2" in counters (basically double the size as before), while corps have 5/8" counters and only informational markers get the wargame traditionally small ½" counters.
Bigger & better game aids: Faction Control Table larger and contains better information regarding the factions…force composition charts now provided…summaries of game mechanics/combat..and components explained, abbreviations, changes vs v1.0 summary!
* Components