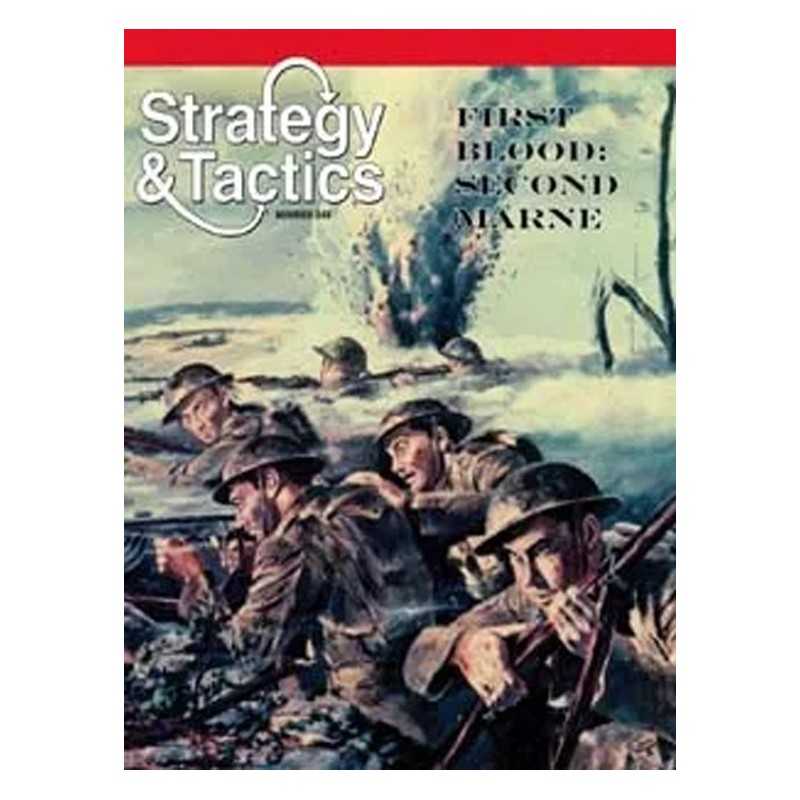 First Blood: Second Marne, 15 July 1918, is a two-player wargame of low-to-intermediate complexity that simulates the final day on World War I's western front during which it was the Germans who held the strategic initiative.

First Blood: Second Marne, 15 July 1918, is a two-player wargame of low-to-intermediate complexity that simulates the final day on World War I's western front during which it was the Germans who held the strategic initiative. After that day, the German high command, though they didn't yet understand they were soon to be fully and finally defeated, knew an offensive solution to the war was no longer available to them. The German player is generally on the offensive, trying to cross the Marne River and exit units southward off the map through the Surmelin valley.

The first game turn of FB represents roughly the first two hours of operations after the Germans began crossing the Marne. Those operations were conducted in the slowing conditions of early morning darkness. Every game turn after the first represents from 15 to about 45 minutes, depending on the intensity of tactical action that takes place within each turn as the daylight battle unfolds.

On the US side the units of maneuver are infantry platoons, along with static heavy weapons emplacements. The latter represent one or two dug-in and pre-sited heavy machineguns and/or 37 mm guns ("one pounders").

The German units are organized so as to be reflective of the chaos created among them by the intense US aerial and heavy artillery bombardment that was conducted against their north bank marshalling areas and bridges. That is, German units represent ad hoc, mixed, tactical formations (primarily storm trooper infantry), ranging in size from sections and squads up to almost full companies, which the Germans self-organized as they left the complete chaos of the riverbank and moved into the semi-chaos of the actual battlefield. Each hexagon on the map represents 100 yards from side to opposite side.

The reverse sides of all the units in the game show carnage. That is, they present a depiction of the human wreckage remaining when units of these small sizes are eliminated in combat. Whenever a unit suffers that fate, players simply turn it over in place, so its carnage side thereafter shows upward within the hex of its elimination. When flipped to their carnage sides, units permanently cease to be "units" for all game purposes, thereafter serving only as reminders of the recent horror that took place in that location.

Carnage markers have no combat effects or stacking values, nor does their presence in a hex generate any extra movement cost for living units as they enter and/or pass through the killing field. Alternatively, if your tastes don't run to an appreciation of carnage, you may choose to ignore the reverse sides of the units and simply remove each unit to a traditional, off-map, "dead pile" as they suffer elimination.