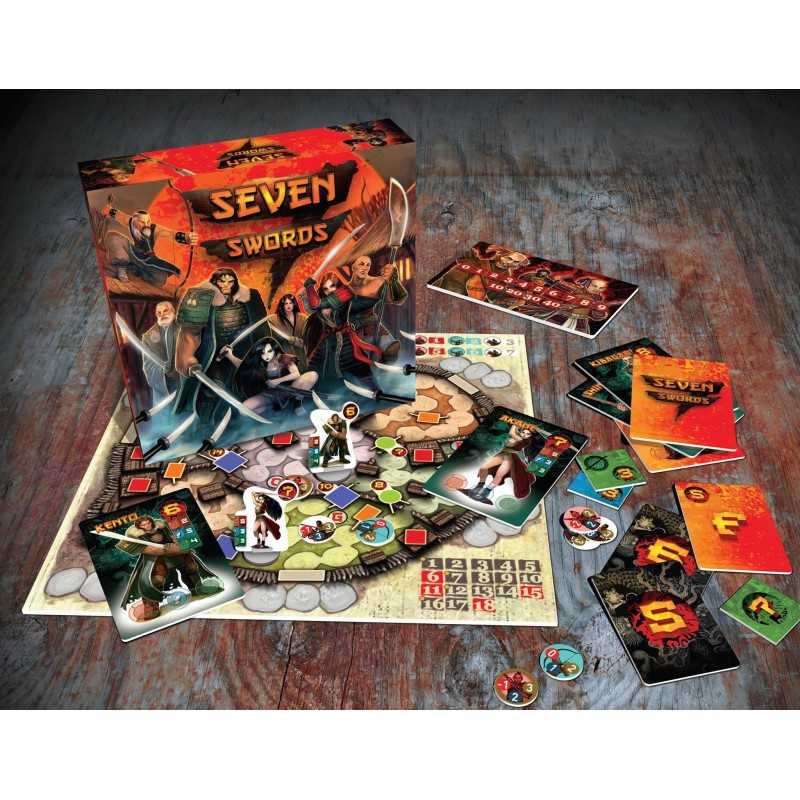 Seven honorable and brave samurai, aided by a handful of frightened villagers, are the only defenders of the village. Will you help these villagers to fend off bandits, or will you command the thieves to steal all the rice you can and punish the insolent peasants?

Seven honorable and brave samurai, aided by a handful of frightened villagers, are the only defenders of the village. Will you help these villagers to fend off bandits, or will you command the thieves to steal all the rice you can and punish the insolent peasants?

Seven Swords is a game for two players in which one player controls seven samurai and the villagers to try to repel the attack of the evil villains while the other player controls the bandits who try to steal all the rice they can and destroy the village. The game lasts 18 turns, after which the player with the most victory points (VPs) wins. The samurai player begins the game with the VPs in the villagers' houses and rice stores, and the bandit player must attack peasant houses and steal rice to acquire these VPs. The bandit player can also earn extra points if he eliminates the samurai in combat.

Each turns consists of two phases. The bandit, who plays first, has seven cards in hand that symbolize the seven sectors of the village. He discards a card to give himself a number of actions that turn, and he might receive additional actions from the samurai player. With these actions, the bandit can play different bandit troops – including infantry, archers and cavalry – with which he can then move around the village and attack the samurai, villagers and rice storage. The samurai player then chooses between five chips – combat, movement, leadership and two special action chips – to see how many actions that he has that turn. A samurai can perform three types of actions – attack, move, and use the villagers to attack bandits – but only one time for each samurai until one of the special chips has removed the counters of such action. The more actions that the samurai player performs, the more actions the bandit has.

After a certain number of turns, the bandit player discards one of his action cards, then eliminates any samurai who is in the field of the discarded card. Other details in the game include bows that help players attack from a distance and fences that keep the bandits from just walking into the village. In addition to having a double-sided game board with different village layouts, the samurai player establishes the placement of villagers, fences, nows and rice storage at the start of each game, allowing for wide variability in gameplay.