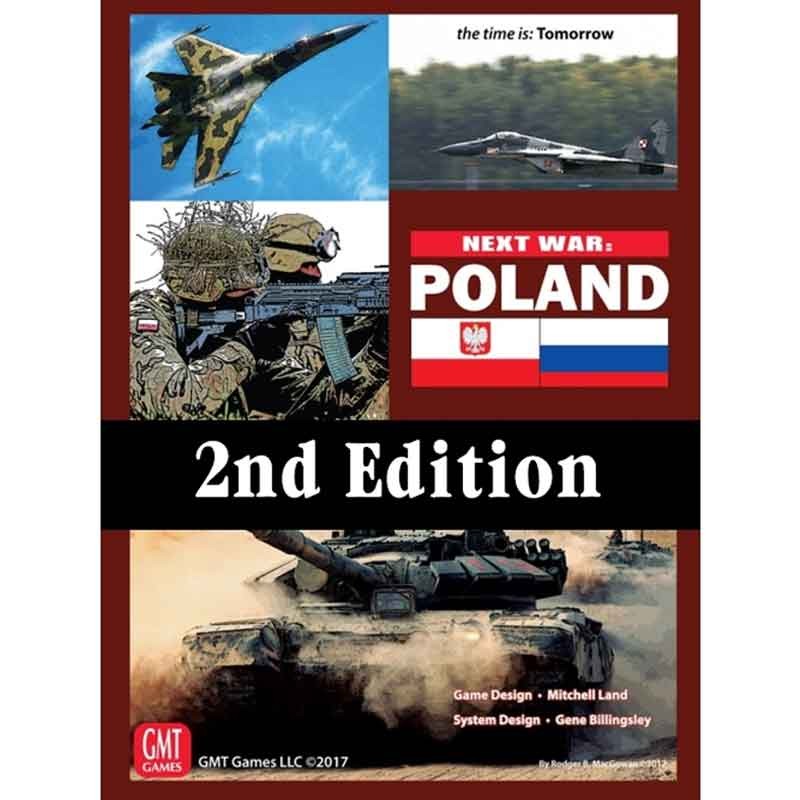 Next War: Poland, the fourth volume in GMT's Next War Series. This game moves the action from Asia to Europe and allows players to fight a near future war in Poland as the Russians and their allies invade and NATO responds.

Ukraine is in turmoil: embroiled in a civil war which has lasted for years and the situation seems further from resolution with each year that passes. Clandestine support from both Russia and the West fuels the war and keeps any hope of peace at bay. In the meantime, the civil war in Syria and the fight against Islamic extremism gathers steam. NATO and Russia stare each other down in a "coopetittion" in the region, and tensions rise meteorically as not so "friendly" fire incidents occur. The West tightens sanctions against Russia and ratchets up its rhetoric; Russia, meanwhile, attempting to regain a place in global power politics, responds with sanctions of its own against Turkey and starts low-level cyber warfare and "little green men" incidents in the Baltics. Tempers flare across the world, Turkey shoots down another Russian plane while Russian SAM batteries shoot down a Turkish F-16 in retaliation. Russia declares enough is enough, decides on war with NATO, and invades the Baltics and Poland. Belarus, knowing where it's bread is buttered, joins in. Some NATO nations rush to the rescue while others debate the issue. Once again, Europe trembles to the rumble of tank treads and marching boots…

Next War: Poland, the fourth volume in GMT's Next War Series. This game moves the action from Asia to Europe and allows players to fight a near future war in Poland as the Russians and their allies invade and NATO responds.

Only a portion of Poland is shown as Ukraine is assumed to be in the midst of a grinding civil war. The Russians are not the behemoth of the Cold War, but they possess good material and a much better trained army. The Baltics may fall quickly, although their forces may put up some resistance and make an appearance as reinforcements, and the front quickly establishes itself in eastern Poland as the Russian 6th and 20th Armies push forward while NATO rushes forces into the area spearheaded by the Allied Rapid Reaction Corps and followed up by whatever nation's troops respond to the Article 5 declaration. The question is, can NATO stop the Russians or will Poland be overrun?

Note: the Next War series is not an Introductory wargame. Rather, we have intended herein to create a system (and a series) that will allow detailed study of modern warfare in various venues as well as engaging gameplay. That said, the Standard Game rules encompass a fairly straightforward ruleset that will, we think, be considered pretty "easy to learn" by experienced wargamers. So players who choose to play Standard Game scenarios can have a relatively quick game when that's what suits them. The real flavor of a war in the theatre, though, comes through in the Advanced Game, where you get much more control over airpower and can more clearly see each side's strengths and weaknesses. For players who want a "mini-monster game" experience, playing the Advanced Game Campaign Scenarios with some or all of the optional rules will definitely "deliver."