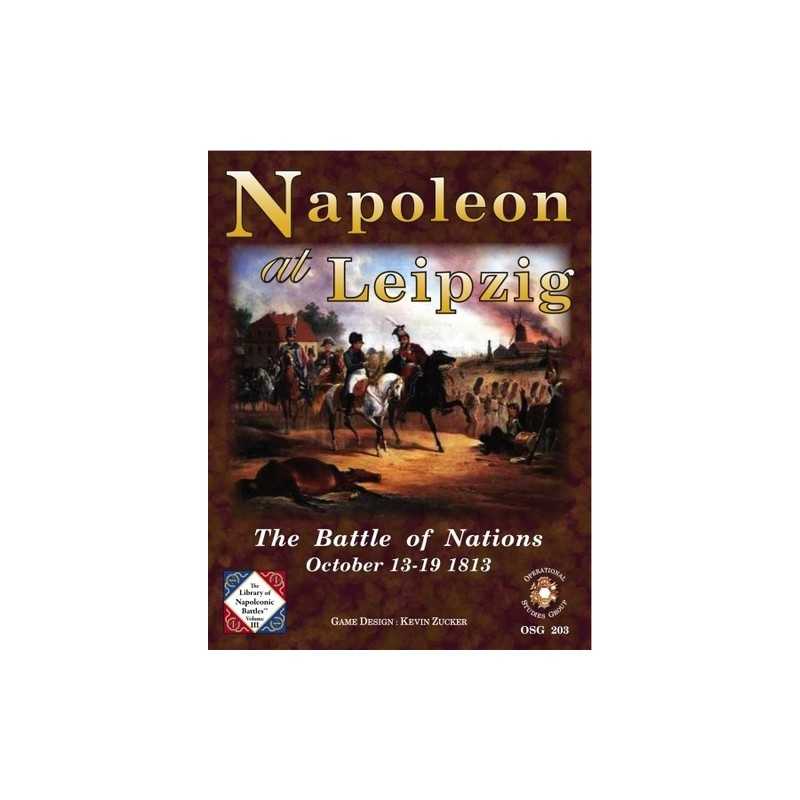 In October 1813 Napoleon was finally forced to concentrate his multinational forces around the city of Leipzig within the Kindom of Saxony. With the three armies of the Anti-French Coalition approaching from all sides the stage was set for the largest European battle until World War I, the famous Battle of the Nations.

In October 1813 Napoleon was finally forced to concentrate his multinational forces around the city of Leipzig within the Kindom of Saxony. With the three armies of the Anti-French Coalition approaching from all sides the stage was set for the largest European battle until World War I, the famous Battle of the Nations.

Napoleon at Leipzig is a comprehensive game with a proven track record of excellent re-playability, among the most popular Napoleonic wargames of all time with 20,000 copies in print across the first 4 editions. Now it has a bigger playing area and more manpower for both sides, all working within a smooth and efficient engine of 19th-century warfare. With this edition all the units, set ups, maps, additional playing area, XIV Corps as Alternate Reinf. have been revised and brought up to the standard rules of The Library of Napoleonic Battles (vedettes, baggage trains, pontoons, cards...). Innumerable details have been added, such as the sandpit outside Leipzig and over 33% more terrain on the two mapsheets. The basic unit is still the brigade but unit strengths have been revised. Each unit now has an Initiative rating based upon the troop quality. There are now vedettes, though only for light cavalry in the first wave of units. After the board is full and the positions of the armies are known, the scouting rôle of cavalry is over. The ever-critical baggage and pontoon trains are newly included. Perhaps the biggest game-changer is the possibility of hidden forces. But the impact, again, is limited, once the armies close for battle, by the fact that units within visual sight distance are revealed. We have bridge destruction and repair. Command works differently ... in the older version, Command was only required for Engaging with the enemy (i.e., entering EZOCs). Now units must either be In Command or make their Initiative roll to move at all.

The main huge battle between Napoleon’s Grande Armée and the coalition of Russia, Prussia, Austria and Sweden is simulated as well as the two starting engagements at Liebertwolkwitz and Wachau-Möckern.

Also included is Napoleon's last battle on German soil, when his last German ally, the Kingdom of Bavaria, changed sides and tried to block the retreating French army at Hanau. Bavarian General Wrede wasn't aware to meet Napoleon himself and the still powerful remnants of the French Army. So he offered battle, hoping to crush stranglers and routing French forces. Napoleon was said to be pleased to lecture his former Ally how to fight a real battle. It started at October 29th at about 08:00h and ended during the early morning hours of October 31st, when the mass of retreating French pushed their way free towards Frankfurt and Mainz.