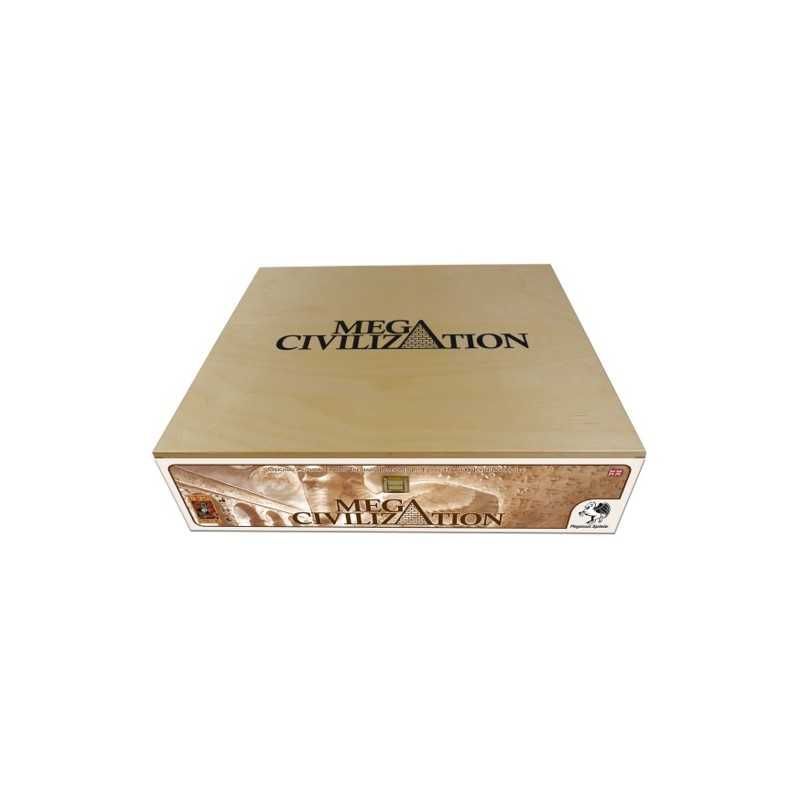 Through the Ages: A New Story of Civilization

Each player leads their own civilization as it tries to expand its culture over a map board that stretches from the Mediterranean Sea to India.

Although battles and territorial strategy are important, Mega Civilization is not a wargame as you might expect when looking at the map board. Instead, the objective of play is to gain a level of overall advancement involving cultural, economic, scientific, political, civic, and religious factors. The player who most effectively balances these various goals will achieve the best scores and win.

In more detail, the objective of Mega Civilization is to acquire the highest number of victory points (VPs) by building cities and developing Civilization Advances. This will be done over various phases and turns, some of which will be performed simultaneously by the players. After each turn, a check is made for each player to move forward on the Archaeological Succession Table (A.S.T.). Each step on this timeline represents a certain period of time in history reaching from the Stone Age. Advancement there will provide even more VPs. The winner will not necessarily be the first player to reach the end of the A.S.T. or the player with the highest number of cities or Civilization Advances, although these are the key factors in determining the winner.

Each civilization begins with a single population token, and every turn each player increases their population by adding tokens to each area they occupy. These tokens can be moved over the map board by land or (using ships) by sea. As each area has a population limit, a good strategic overview will give players advantage in occupying more and more areas. If a player manages to move sufficient tokens into an area, they can build a city there. These cities generate trade cards which will eventually lead to wealth. During trade sessions, players receive not only the commodities they need to complete sets; they might also receive calamities which will remove population or cities. Specific Civilization Advances will protect the players from natural or civic calamities. The development of these Civilization Advances is symbolized by turning in sets of trading goods, as the wealthier civilizations will acquire more Civilization Advances.

As civilizations develop, it will be harder for their rulers to find the right balance between future population growth, maintaining enough support for their cities, and increasing their treasury. If they cannot manage their token population, their cities might eventually revolt during the tax collection phase. The civilizations with the strongest economy traditionally score the highest.

A game of Mega Civilization can take 10-12 hours to complete. Players can also choose to play the beginner scenario — "The First Game" — which takes only 1-2 hours. Another scenario — "The Short Game" — provides the same excitement as the full game, although the game starts in a later age; by doing this, games can be played in "only" 6-8 hours.