Fall of Saigon Fire in the Lake expansion 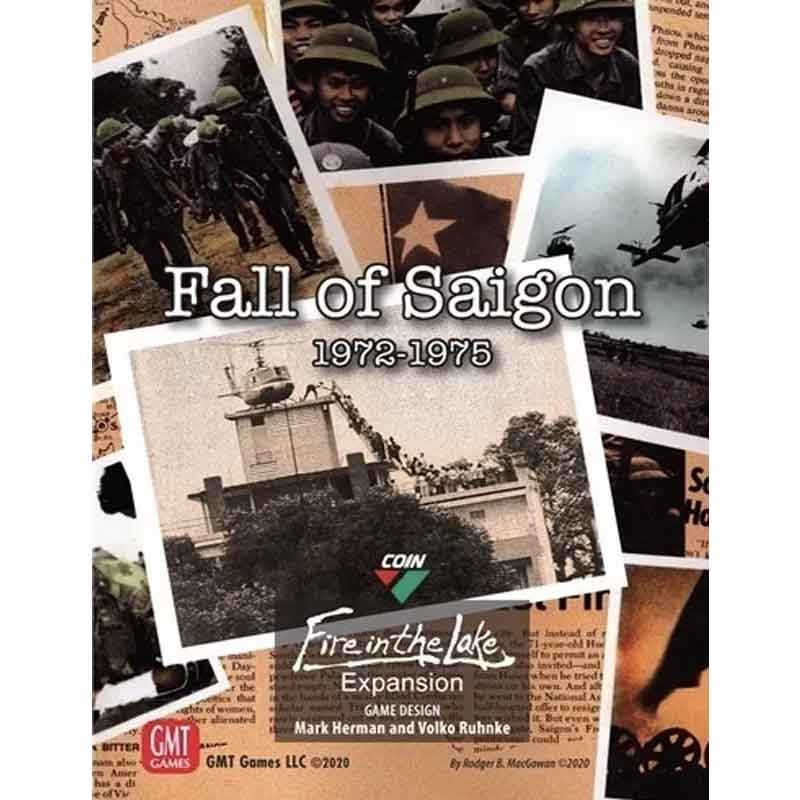 Vietnam, 1975. The Provisional Revolutionary Government was ready. After internal debate, the Communists had issued Resolution 21—the war to unify the country would continue. Mark Herman and Volko Ruhnke’s award-winning Fire in the Lake revealed the factional clashes of the US insurgency in Vietnam, from the first entry of US combat troops under Westmoreland to the ’72 Christmas bombings that teed up their negotiated withdrawal. Now, Fall of Saigon expands Fire in the Lake to finish the story.

Fire in the Lake 3rd Printing

Tru'ng Bot for Fire in the Lake

Vietnam, 1975. The Provisional Revolutionary Government was ready. After internal debate, the Communists had issued Resolution 21—the war to unify the country would continue. The Paris Peace would serve as merely one more tool in the armed struggle. In Saigon, President Thieu had known from the beginning that the ceasefire was an empty promise, but he had to accept his US ally’s hollow accords with the North. Nonetheless, he now fielded one of the world’s best equipped armies, and the victories of 1972 proved to him that it could withstand even an all-out assault from the North. While President Nixon had pledged peace with honor, his determination to enforce South Vietnam’s independence had floundered amidst the worst US presidential scandal in history. What now from Ford? From Hanoi, Le Duc Tho—the negotiator who had squared off against Kissinger in Paris—was to trek south to oversee the final push to Saigon on behalf of the Politburo. His orders: “Do not come home until victory is won.”

Mark Herman and Volko Ruhnke’s award-winning Fire in the Lake revealed the factional clashes of the US insurgency in Vietnam, from the first entry of US combat troops under Westmoreland to the ’72 Christmas bombings that teed up their negotiated withdrawal. Now, Fall of Saigon expands Fire in the Lake to finish the story. Three Fall of Saigon scenarios enable 1-4 players to extend play beyond Paris, beginning before 1968’s Tet, on the eve of the 1972 Easter Offensive, or from 1964 all the way to the end of the war. A standalone 2‑player Black April scenario focuses tightly on the post-Paris sparring between NVA and ARVN, including the final massive battles, advances, and retreats.

To show the transition from insurgency and counterinsurgency to mobile mechanized warfare, Fall of Saigon introduces an array of new features, including:

Paris Peace Talks that may result in either US or NVA Retreat—or both.
A building US Anti-War Movement and Northern War Weariness penalizing the continued campaigns.
US Posture that players influence to allow anything from full-bore US economic and financial backing of ARVN’s defense and even a return of US heavy bombers over the North to utter abandonment of South Vietnam.
Hard-hitting NVA and ARVN Armor units capable of lightning Spearhead actions and of capturing the enemy’s vehicles to turn around for their own use in the next attack.
Head-to-head action, NVA versus ARVN, using the acclaimed 2-player Initiative system from COIN Series Volume VII, Colonial Twilight, by Brian Train.
72 new Event cards for 1973-1975 and four new Pivotal Events to portray the political struggles in Washington, Hanoi, and Saigon; the building conventional military capabilities of the combatants; NVA probes and ARVN counterthrusts; threatened US enforcement of the Accords by air; and the chaos of the final collapse.
For solitaire players, Fall of Saigon introduces the popular new card-based Non-player system from Bruce Mansfield, designer of COIN Series Volume IX, Gandhi.

Fall of Saigon will include 79 Event, Pivotal Event, and Coup cards; about 30 Non-player cards; one sheet of counters and track tiles; about 20 added wooden pieces; new and updated player aid charts; and expansion rule and play booklets. Fire in the Lake veterans will find the war beyond Paris easy to rev up but a whole new experience.

Fight on and find the end of the tunnel. A copy of Fire in the Lake will be necessary to play the Fall of Saigon expansion.