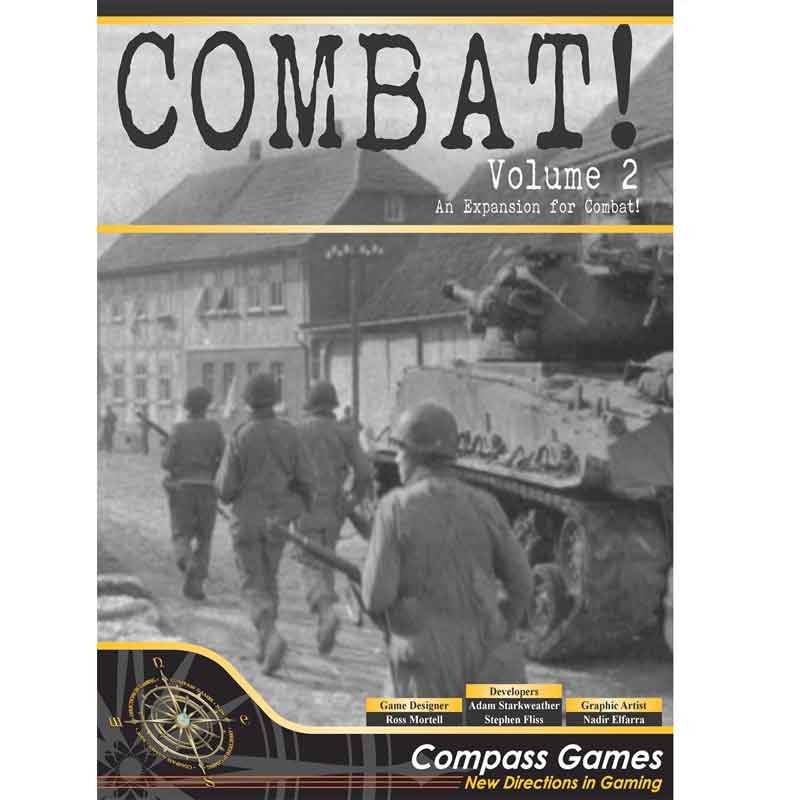 Combat! 2 is an add-on module for Combat! You must have Combat! to play this expansion. Various new features have been added such as: Elite Enemies in the form of the SS, a third Squad and command elements for the Americans so Platoon Actions can be gamed with multiple players; new weapons such as the STG44, the Thompson Sub-machine gun and the Springfield 1903; and much more!

Combat! 2: From D-Day to V-E Day Campaign Expansion adds many new features such as:

Elite Enemies in the form of the SS
A third Squad and command elements for the Americans so Platoon Actions can be gamed with multiple players
New weapons such as the STG44, the Thompson Sub-machine gun and the Springfield 1903
Weather variations – Rain, snow, mist as well as Ground conditions like mud or snow
Rules for fire – now artillery can start fires
Trained medics – unarmed but efficient
Vehicles – Pzkpfw IVF2, Sherman M4A3, M3 Half Track and trucks
Light anti-tank weapons such as the Bazooka and Panzerfaust
12 new stand-alone scenarios

Combat! 2 will also include:

a fully structured campaign game
follow the fortunes of your squad from D-day to VE-day performing missions and patrols; will your squad be an efficient well-disciplined unit or the new Dirty Dozen?
Character skills and experience and 7 ‘Campaign’ Scenarios
Name your soldiers and follow their fortunes across the war
Gain skills
Develop enemies within the squad
Earn medals
Foxhole buddies who become inseparable during missions.

The Campaign Game consists of 6 ‘Chapters’, ‘Normandy’, ‘Pursuit’, ‘Hurtgen Forest’, ‘The Bulge’, ‘The Siegfried Line’ and ‘Germany’. Not all Chapters will be played depending on events.

So, in one Campaign you may be transferred to the Ardennes and take part in the Battle of the Bulge whilst in another you are sent to the hell of the Hurtgen Forest.

You will also play Missions and Patrols during the campaign and each Chapter has its own Mission Tables with 100 different missions and a Patrol Table with 10 different Patrols.

Each Campaign will be unique, and you will get to create your own story each time you play.

Complexity: 6 out of 10
Solitaire Suitability: 10 out of 10 – Designed specifically for solitaire play
Time Scale: Abstracted dependent upon actions taken per round but between 30 seconds and 2 minutes
Map Scale: 10 yards per hex
Unit Scale: Single man – man-to-man combat
Players: One – Designed specifically for solitaire play
Playing Time: Two to six hours dependent upon size of scenario