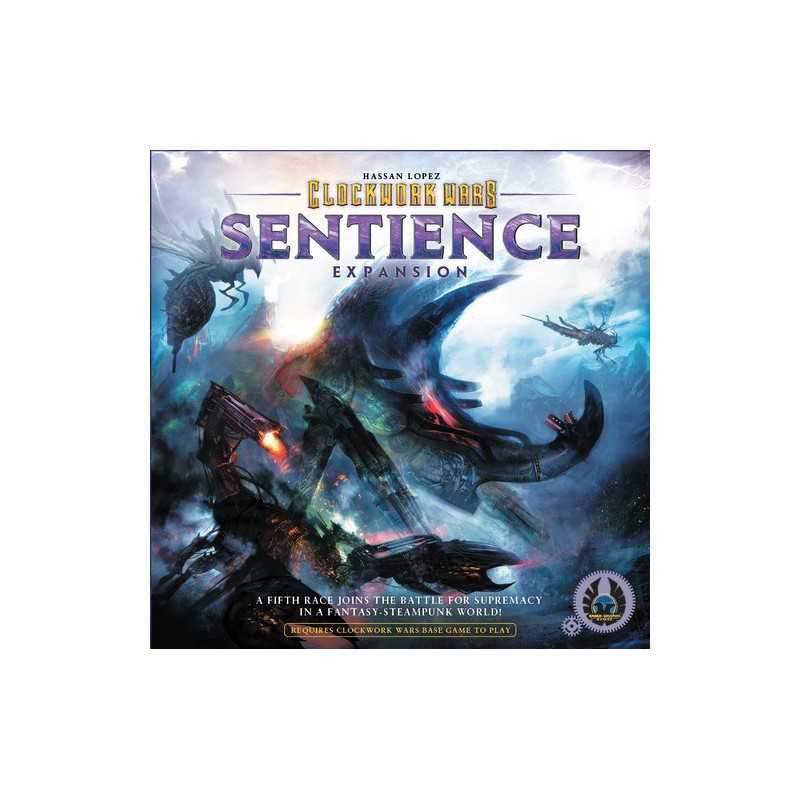 Sentience is an expansion for Clockwork Wars, an epic board game of conquest, discovery, and espionage from Eagle Games. It adds a number of new Discovery and Espionage cards, a new Court, more hexagonal tiles to make even larger and more varied maps

Sentience is an expansion for Clockwork Wars, an epic board game of conquest, discovery, and espionage from Eagle Games. It adds a number of new Discovery and Espionage cards, a new Court, more hexagonal tiles to make even larger and more varied maps, 2 new Territory types (the Observatory and Nexus), and a fifth race: the Inventions. This now allows for 5-player games.

The civil war between the Purebreeds, Mongrels, Troglodtyes, and Rhinochs has raged for what seems like ages. Amidst this endless chaos, the races struggle for any advantage that will turn the tides of war. Recently, some Mongrel scouts happened upon a gaping chasm of magical energy deep beneath the surface of the earth. Technowizards from across the land swiftly converged upon this newly christened “nexus” and set about harnessing its power. Meanwhile, scientists and priests have constructed magnificent observatories to study the heavens, and the mysteries revealed therein have been both startling and profitable.

But by far the most significant turn of events has been the emergence of a new race – the autonomous, thinking machines known as the Inventions. Some suspect the first Invention was created by Sir Erasmus Paniscus, the brilliant Troglodyte engineer. They have rapidly multiplied since their origin, due to their miraculous ability to build new Inventions in their astonishing magical workshops. For reasons unclear, they possess a profound, almost mystical love of the natural world, and have chosen to shape themselves primarily in the forms of insects, spiders, and beetles. They are a young race, exhibiting an innocent naivety of their immense potential and power. But they understand that they must defend themselves in this time of war if they wish to survive as a free, sentient race.