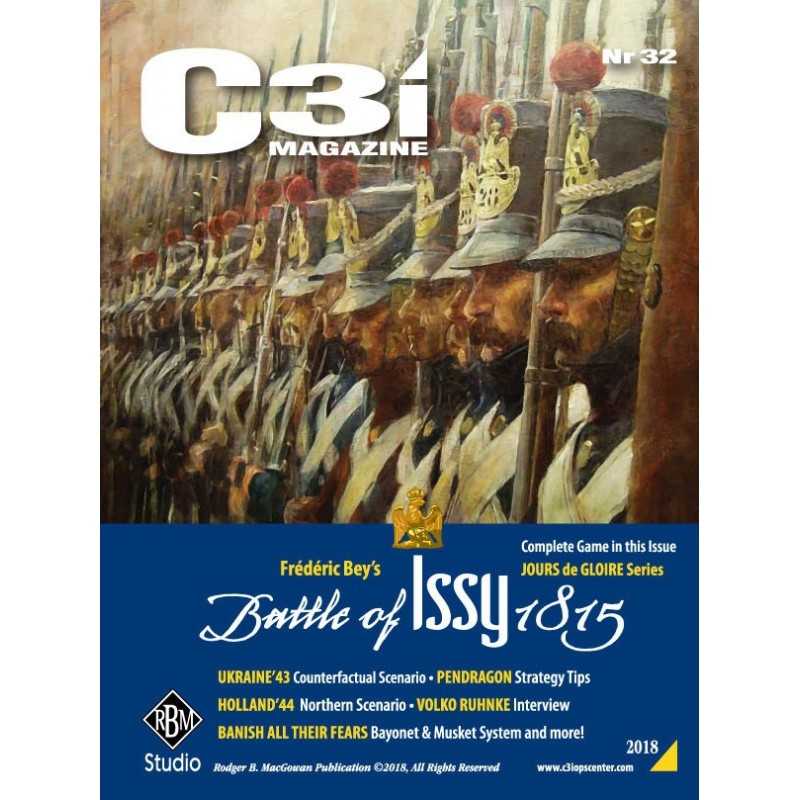 In each C3i Issue, you will find articles, games, scenarios and contents for the GMT games. 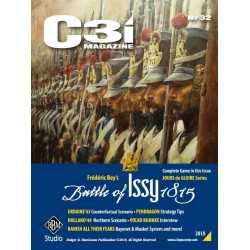 In each C3i Issue, you will find articles, games, scenarios and contents for the GMT games.

A  short description of what each article in this issue covers

• Disaster on the Dnieper—New Scenarios for Ukraine’43 by Trevor Bender: Trevor Bender returns to further dissect what makes a counterfactual scenario work, introduces a new scenario included with this issue of C3i, and provides a bonus scenario based around the Kursk Offensive, the largest tank battle in history.

• Denmark—The World’s Largest Gaming Cooperative by Jason Matthews: Jason Matthews, co-designer of Twilight Struggle, journeys to a boarding school in central Denmark where they support their curriculum with LARPing (Live Action Role Playing) and general gamification, yielding very exciting and encouraging results. After facilitating the Cuban Missile Crisis writ small, he is invited to Fastaval 2017, a place where thousands of gamers from every subgenre gather to share and play games, as well as participate in game design contests. A really insightful look into Danish gaming culture.

• Pentecontaetia—Strategy in Pericles—1ST Peloponnesian War by Mark Herman: “Over the course of my wargame career, I have studied and published at length on military strategy. I have found over the last few years my deep interest in integrating my Defense experience to look at warfare strategy as an extension of political strategy (Clausewitz). My first deep look at this narrative was in my Churchill design. Pericles, my second entry to the “Great Statesmen” series, goes deeper into faction politics, something that seems particularly appropriate in 21st century America (see my Clio’s corner from last issue).”

• Lysander—2 Player Variant for Pericles by Philip Jelley: One of the problems with a four player game is it is sometimes difficult to get the requisite crew together to play, which Philip Jelley has sought to remedy with this exciting variant, fleshed out at Mark Herman’s request, no ‘Bot required.

• Banish All Their Fears—Bayonet & Musket System Design by Ben Hull: Ben Hull recounts how he developed the Musket & Pike system, the ancestor of the new Bayonet & Musket system, and gives us the historical context for why the new system will be a streamlined yet accurate depiction of shifting battle rhythms.

• Clio’s Corner #9: Take Me To Your Leader or “Where’s the ‘Bot?” by Mark Herman: “The first challenge is how to assimilate players of varying skill and historical knowledge into a new system, beyond learning the mechanics. I find that a ‘Bot can act as a surrogate strategy advisor on that all important first turn, when you have no idea what to do next… I thought it was time to talk about solitaire systems from a design point of view. I will approach this topic from my own personal journey and how my thinking has evolved on this topic over time with some of my key findings in what is loosely call 'My Beginner’s Guide to ‘Bot Design,' with myself in the role of the beginner."

• C3i Interview—Volko Ruhnke by Sam Sheikh: Volko is a retired US intelligence analyst who worked in the Central Intelligence Agency’s Directorate of Analysis from 1989 to 2018 and in the US Department of the Army as an International Relations Officer from 1986 to 1989. During his national security career, he helped incorporate tabletop game design into analytic training and research about real-world military, political, law enforcement, and economic issues.

• Holland’44—S3 Northern Scenario by John Davis: This scenario covers the actions of the 82nd and 1st Airborne Divisions, and the attempts by 30 Corps to break through to Arnhem. It covers the initial air drops through to 22nd September, after which increasing German attacks on the fragile 30 Corps supply corridor made further Allied progress increasingly difficult.

• Stand Alone Games—INSIDE C3i Magazine—RBM Studio Centerspread: We know you read the magazine for the articles, but here’s the centerfold showcasing all the stand alone games C3i has printed since Issue Nr 20.

• Pendragon Strategy Tips—The Barbarians by Morgane Gouyon-Rety: This is the first of a projected pair of C3i papers on strategy tips for Pendragon – The Fall of Roman Britain, Volume VIII in the COIN series. This first entry focuses on the two Barbarian factions, the Saxons and Scotti. They appear to be the most challenging to grasp for new players, and designer Morgane Gouyon-Rety is here to be your guide.

• Last Eagles—Ligny 1815—a Hexasim game, by Mark Kaczmarek: Last Eagles – Ligny 1815 is the third game in the exciting Eagles of France series following the release of Fallen Eagles-Waterloo and Rising Eagles-Austerlitz, all published by Hexasim. The battle of Ligny, occurring on June 16th, just 2 days before the epic battle of Waterloo, is often overlooked by many wargamers and historians. However, the results of this battle had immediate impacts to the conduct of the Waterloo battle and as such deserves to be studied in its own light. Mark gives us a rundown of the history, and how dynamic this simulation of the battle is.

• On Similarity and Diversity in the COIN Series by VPJ Arponen: The COIN series stretches across six years with eight award winning volumes and a further two volumes and two expansions available for preorder, not to mention several more in various stages of development. What makes the COIN system so stimulating? What is its essence? In this article, we will be analyzing the series as well as talking to a number of COIN designers to find out.

• C3i Scenario Guide—Table Battles, a Hollandspiele Games production, by Tom Russell: Table Battles “can be used to conceivably cover any traditional set-piece land battle from any period in human history.” Tom gives us a basic run-down of how his system works, and an overview of the two battles (Gaines’ Mill and the Bouvines) in this issue. You thought you got two games in C3i Nr 32? Naw, you got three. You’re welcome.

• C3i Interview—Ben Hull by Sam Sheikh: Ben Hull is a game designer and U.S. Marine officer who is well known for designing the Musket & Pike Series and Fields of Fire. He is currently working on creating the new Bayonet & Musket Series (GMT Games) with Volume I: Banish All Their Fears depicting the Battles of Neerwinden 1693 and Blenheim 1704.

• GBoH Series—C3i Scenario Designer’s Notes by Daniel A. Fournie: Dan looks back on the GBoH series, reflecting on the many volumes of analysis he has done for past issues of C3i as well as how he initially got into the series. He then breaks down how he approaches the production process of both writing articles and designing scenarios within the GBoH series.

• Road to Moscow—World Wargame Hobby: Igor Luckyanov and Dmitry Klyuykov are the co-owners of the proWargames store in Moscow. Selling only board wargames since 1996, they are proud to share with us some of their initial experiences in the wargaming hobby, and have constructed an illuminating profile on the hobby today from their brick and mortar shop in downtown Moscow. (http://www.prowargames.ru).