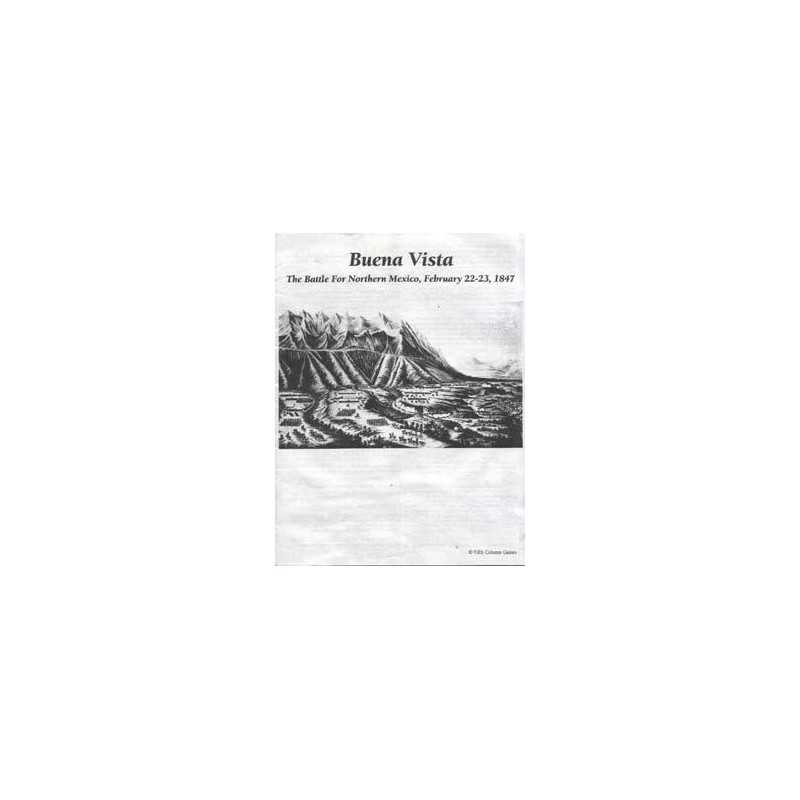 Sub-title is "The Battle for Northern Mexico, February 22-23, 1847" with Artwork by Mark Simonitch & Stuart Rose, as well as assistance from Mark Miller, Gary Miller, & Mark May. The Game is contained in a Ziploc "Baggie". 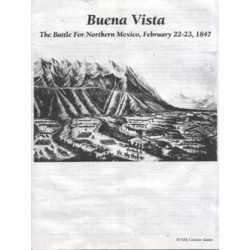 Sub-title is "The Battle for Northern Mexico, February 22-23, 1847" with Artwork by Mark Simonitch & Stuart Rose, as well as assistance from Mark Miller, Gary Miller, & Mark May. The Game is contained in a Ziploc "Baggie".

Sub-title is "The Battle for Northern Mexico, February 22-23, 1847" with Artwork by Mark Simonitch & Stuart Rose, as well as assistance from Mark Miller, Gary Miller, & Mark May.

The Game is contained in a Ziploc "Baggie" with a 22x34" 7-Color mapsheet, 100-Glossy Color Cardboard Counters, a Large Rules Booklet, 2-Casualty & Ammo Record sheets with a reduced planning mapsheet printed on the reverse(1 for EACH Player) while it is suggested that copies be made of these, and Players will need to provide their OWN writing utensils & ORDERS paper as well as at least (1)-10-sided DIE.

The scale of the game is 90 yards across for each hex, a Strength Point represents 25 Men or 1 Gun, and a Turn equals 20 Minutes split into (4)-5 minute impulses. A Game Turn Sequence consists of the following: 1.RAIN phase(only on Turns 27 through 31); 2.1st Impulse-a)Reinforcement phase, b)Command phase, c)Cavalry Charge Initiation phase, d)Tactical Movement phase, e)Charge phase, f)Simultaneous Fire phase, g)Shock phase followed by 3 MORE similar Impulses as the latter detailed previously. Once the 4 Impulses are completed, then there is a Strategic Movement phase, a Rally phase, and a Mountain Skirmish phase rounding out the Turn. It is during the Command phase that Players will write out and conduct activation of their Orders, which require a certain number of Impulses before they arrive at their intended destinations.

The Rules go into details such as Sighting, Force Marching, Multi-hex Units(line extension), Stacking, Facing, Formations, detaching Rifle Companies(U.S. only), Attacking in the Mountain & Saltillo Boxes, Casualty marking, Ammunition depletion, Routing, Rallying, Special Rules such as RAIN, Mexican Units besieging Saltillo and their conditional release as well as the American's Forces there, Optional Units, and Resupplied Mexican Forces continuing the battle beyond the "actual" time limits. There are 2 Scenarios: 1.February 23, 1847 starting turn 10 to turn 40; & 2.February 22 & 23, 1847--40 turns long beginning with turn 1. An extensive Historical Notes is written up accompanying this with Bibliography & designer's notes and an Example of play with commentary.

This appears to be another attempt at introducing a "miniatures" based concepts & game mechanics into a conventional cardboard counters game. Although the thought processes involved are more adept at producing the desired effects of delayed Orders implementation than some previous games, only devoted wargamers could adequately appreciate this facet of play. This is definitely NOT for the casual wargamer, but more for the dedicated Historical "feel" for the era enthusiast.