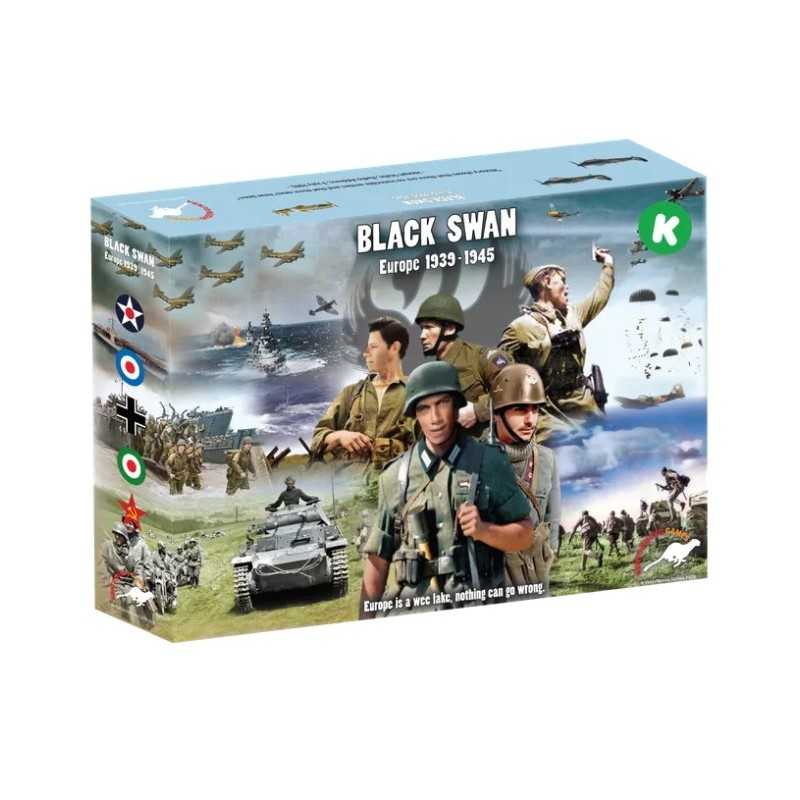 Black Swan. Relive WW2 in Europe from 1939 to 1945. Two to five players, with excellent solitaire suitability.
Black Swan is a block game with over 200 combat units. A game turn is three months (a season) and there are several three-season Scenarios and two Campaigns (1939 and 1941).

When in 1939 Hitler ordered the invasion of Poland, few in Germany - and probably in the rest of Europe - believed that France and Great Britain would have declared war.

In the previous months Hitler had broken the Treaty of Versailles, by which the harsh conditions imposed had humiliated and starved the German population for years and led to a political reunification of the original German Reich: restored the Rhineland, annexed Austria and invaded Czechoslovakia, with the tacit consent of the other nations, Great Britain and France above all.

So his assumption that he could have done the same with Poland had a logical basis. Instead this time events went another way.
Most European countries had been so devastated by WWI that few wanted another war. Ignoring the German preparations for a renewed war of revenge based on the new Blitzkrieg tactics, France developed an old fashioned concept of static border fortifications - the Maginot Line - and Chamberlain's Great Britain focused entirely on diplomacy in an attempt to deal in a gentlemen fashion with the rapacious and very ungentlemanly Nazi regime.

Even after the fall of France, which surrendered in a few weeks after a blitz attack across the Ardennes - almost the same move adopted at the beginning of WWI - Great Britain still tried to reach an agreement with Hitler.

This did not happen and Great Britain remained alone, with no American help, and was on the edge of the defeat, having to choose between an unfair peace or the threat of an invasion. It was only one man, the freshly appointed prime minister Winston Churchill - going against any logic and even against his own political peers and the Crown - that wanted to resist, and the outcome of the Battle of Britain later proved him right.
However many months would have to pass before the Soviet Union first and the US later would join the Allied cause to restore peace in Europe, at the cost of millions of deaths....

As the Axis Powers you have to swiftly win the war, either by a Mediterranean strategy to break the British Empire, or an all out effort to demolish the Red Army. If a Decisive Victory is unobtainable, you can still go for a Strategic or at least an Economic Victory.

As the Allies, you must survive the initial onslaught and prepare for a long war of attrition before dealing a deathly blow to the Reich's body.
I hope you will enjoy Black Swan, and that it will answer some of your questions as well. I look forward to the conversations that will follow its release.

Historical Intro
To strive in this world is to abide in the planes of chaos.
Nowhere is this more readily apparent than in war. The belief in a cause, the assurance of a plan, the security of ordered ranks and painstaking calculation, all these are thrown into the hazard of conflict. Nothing ever survives. Everything is changed. In the aftermath, the world must always be rebuilt out of expediency and pretence.

Since antiquity, some have known this as “The Black Swan.” It is the rare and unlooked-for event, something that is entirely unexpected and presages abrupt reversal.

In martial terms, The Black Swan symbolizes the unravelling of apparent certainty, together with man’s desire to contrive notions of opportunity, or excuses for defeat, whenever he dares play with the volatile flames of ambition. Napoleon’s fortune succumbed to this very phenomenon the moment his army moved against Russia. By the time of Waterloo, the great improviser of battlefield success had truly become the shifty and evasive apologist for disaster.

And then it was Hitler’s turn. Lying in a hospital bed come the end of The Great War, whose four year course was the embodiment of bold assertions gone awry, the infantry corporal simply could not accept the sudden and supposedly unforeseeable collapse of his beloved army. What had gone wrong? That army stood everywhere on enemy ground. Russia had succumbed and was occupied, and the French had been bled white. It could only be betrayal - betrayal by communists and the craven factions in government. These were his “Men of 1918.” The German army had not been defeated. The soldiers had simply been stabbed in the back. And one a night in early 1933, as he stood on the podium in the packed Berlin Sportpalast, that is the story he told. He would still be telling it twelve years later.

But the swan is no respecter of any cause or purpose. Whatever things were, and whatever they become, the constant truth is, as Yeats put it: Things fall apart, the centre cannot hold, mere anarchy is loosed upon the world. Whatever is gained or lost is not merely about having one good plan or a single bad one; rather, it is about what ensues when all plans inevitably founder. Even if you cannot predict what is unpredictable, you should at least prepare for it the best you can. Men make plans to give order to chaos. Whoever does that best will emerge victorious.