> Board games>The War for the Union

The War for the Union 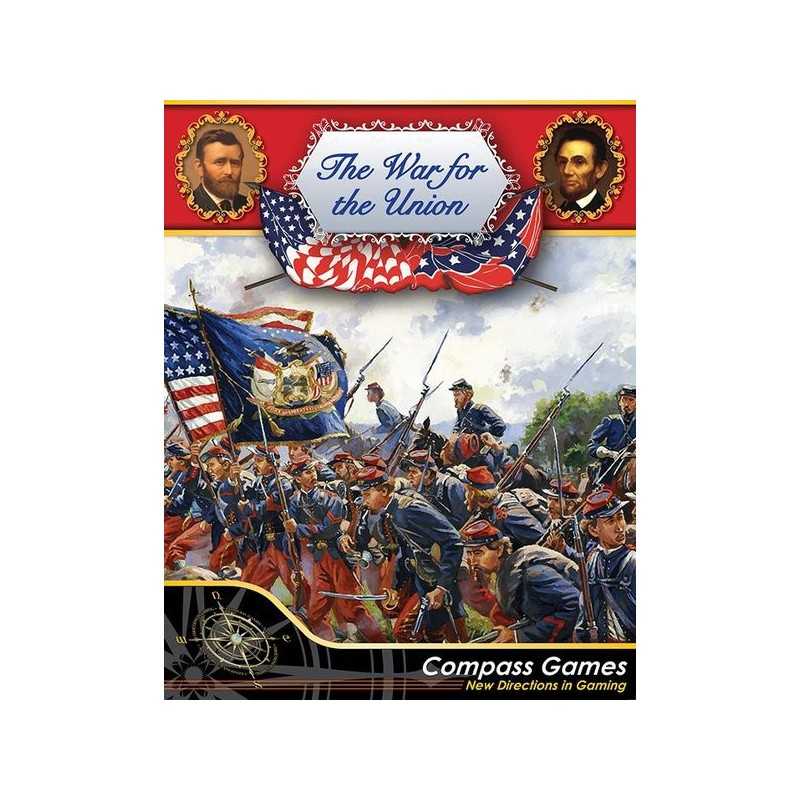 The War for the Union is a strategic level simulation of the American Civil War. It is the long awaited 2nd edition of the game originally published in 1992. Players command the Union and Confederate forces that fought from 1861 to 1865. 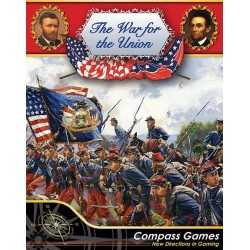 The War for the Union

The War for the Union is a strategic level simulation of the American Civil War. It is the long awaited 2nd edition of the game originally published in 1992. Players command the Union and Confederate forces that fought from 1861 to 1865.

The War for the Union is a strategic level simulation of the American Civil War. It is the long awaited 2nd edition of the game originally published in 1992. Players command the Union and Confederate forces that fought from 1861 to 1865. The map runs from southeastern Texas to the Atlantic and from Harrisburg, PA to southern Florida. The new map is 34” x 44” to accommodate larger counters. Atlanta and Pensacola are now in the Western Theater. Terrain types include forests, rough, swamps, bayou, mountain hexsides, river hexsides (tidal, navigable, and minor), lakes, bluffs, and major and minor cities.

Ground units include infantry and cavalry strength points. Quality varies from Militia (worst) to Volunteers to Veterans (best). There are about 5,000 men per strength point.  There are corps and army leaders and a few division leaders. Leaders have a Command Rating which indicates how many strength points (SPs) they can command, a Battle Rating (combat DRM), and a Movement Factor which also affects their force march DRM. Union militia recruits now have 3 MPs but a very poor force march DRM. There are seagoing and riverine naval units, including ironclads. There are also river transports which are very valuable to the Union player in developing campaigns along rivers. Since the Confederates cannot use sea movement, the Union sea movement capability is somewhat abstracted.

The quality of the armies, particularly the Union, improves as the war progresses. The Confederate player starts out with a small qualitative advantage but the Union catches up by the spring of 1863. The Confederates also have better leaders early in the war but the Union gets more and better leaders as the war progresses. Army counters, such as the Army of the Potomac and the Army of Northern Virginia, are central to the play of the game. Armies enable more efficient use of strength points, leaders, and supply.

The Sequence of Play has a Reinforcement Phase during which both players bring on reinforcements. Then there is a Supply Phase. Units that are out of supply, in swamps or bayou, or at Fatigue Level 3 or 4, roll attrition. During the Movement Phase ground units and leaders move, including force marching, and strength points can entrench. Infantry and Militia Cavalry must be under the command of a leader to move. Naval units also move and can attack batteries or other naval units. Then there is a Combat Phase where leaders and ground units attack enemy units.

Combat uses an attrition CRT with Light, Medium, and Heavy losses along with retreats. There are strength multipliers and DRMs. Higher quality troops and better leaders are very helpful in combat. One leader initiates an attack; other leaders add their SPs in at a reduced effectiveness. A 10 sided die puts a little bit more emphasis on the odds and a little less on the DRMs. An Army HQ allows the army commander to initiate the attack and all of his subordinates (typically 2 to 4) to add their SPs at full value. In addition to losses, units can pick up Fatigue during combat on an M, H, or retreat result. The more fatigue a unit accumulates, the less capability it has. An L* result also results in a Fatigue Point during Poor weather or a second attack by an aggressive leader.

The Confederate Supply Capacity is the total of the supply values of all of the Confederate supply cities. The ability of the Confederates to recruit SPs and sustain armies in the field is directly related to their overall supply capacity. Key Industrial Center (KIC) counters represent the principal industrial areas of the Confederacy. KICs produce Resource Points which are used to construct forts, batteries, and naval units, and for several other game activities. Both players may begin building Level 2 entrenchments  and Improved Forts in October 1863

The Union begins the war with a small number of seagoing wooden ships and a couple river transports. As the war goes on, the Union player receives ironclads and more seagoing ships and river transports. The Confederates receive a small number of river rams, transports, and ironclads. They can also build a limited number of additional ships using their Resource Points. Naval units can be used to attack batteries and support ground attacks as well as attack other naval units. All naval combat tables use a 10 sided die and have two levels of damage in additional to sunk results. River Depots and Naval Deports are used to trace supply by river or sea, respectively. Union sea movement is simplified by moving through sea zones. The Union player can blockade individual Confederate ports with naval units or batteries.

There are two short, introductory scenarios (Bull Run 1861 and Missouri 1861). The Second Edition adds two 7 turn scenarios in just the Western Theater (Tennessee 1862 and Tennessee 1863). There are three 1 year scenarios using both theaters (1862, 1863, and 1864). And then there is the 1861-1865 Campaign Game. Either player can win by achieving the Sudden Death Victory Conditions at the end of 1862, 1863, or 1864 if they are doing exceptionally well. The 1864 Presidential Election occurs at the beginning of the November 1864 turn; the outcome can be influenced by the onboard situation. Players can also select from a menu of 15 optional rules including using a deck of Event cards.

Solitaire Suitability: 8 out of 10

Number of Players: 2 to 4 plus solitaire

Playing Time: An hour for an introductory scenario, an evening for a 1 year scenario, and a weekend for the Campaign Game

2 reinforcement schedules – 1 each for North and South