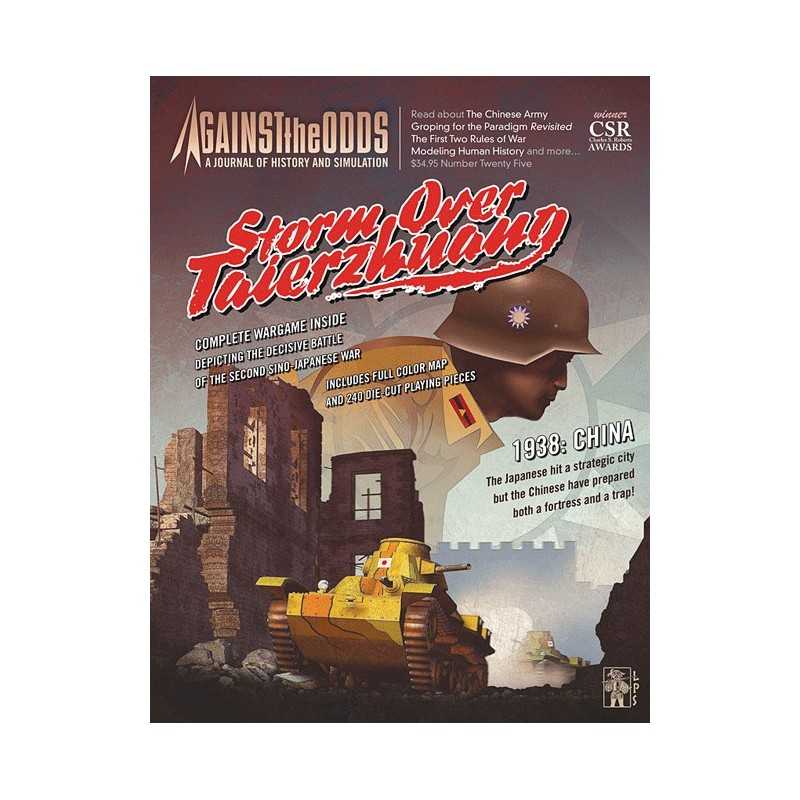 It sounds very familiar. An Axis army launches an offensive to take a key city, hoping this will be the final victory needed to knock an Allied giant out of the war. Except, the defenders anticipated the attack and set up an elaborate trap, turning the city into a fortress that had to be taken block by block and building by building.

It sounds very familiar. An Axis army launches an offensive to take a key city, hoping this will be the final victory needed to knock an Allied giant out of the war. Except, the defenders anticipated the attack and set up an elaborate trap, turning the city into a fortress that had to be taken block by block and building by building. With most of the city captured, the defenders suddenly launched a massive attack on both flanks and virtually eliminated the Axis army.

No, China, 1938. Probably one of the most decisive battles that hardly any gamers have ever heard of. Until now.

By 1938, the Second Sino-Japanese war was not going well for the Chinese. Since July 7, 1937, the Japanese had conquered huge swathes of Northern and Eastern China and were steadily pushing deeper. With the Japanese conquest of Shanghai, Beijing, and Nanjing in 1937, Nationalist leader Jiang Jie Shi (Chang Kai Shek) moved his headquarters to Wu Han. The Japanese saw an opportunity to capture the important rail junction of Xuzhou and thereby endanger Wu Han, which could force a Chinese capitulation. The Nationalist Chinese generals, however, also saw the Japanese move as an opportunity to lure their enemy's forces into a cul-de-sac where they could be encircled by the numerically-superior Chinese forces.

The town of Taierzhuang was chosen as the site for this trap as it was an important rail terminus on the way to Xuzhou. Li Tsung Jen, the Nationalist Chinese general in charge of the 5th War Area (with around 100,000 men in 9 divisions), was given the task of defending Xuzhou. He and his command were familiar with the area and terrain that would channel the attacking Japanese into attacking Taierzhuang. The terrain and populace would then cut the tenuous Japanese supply and communications lines and, when the time was right, the Japanese would be encircled and destroyed. On January 26, 1938, the Japanese launched their offensive towards Xuzhou. By the evening of March 24, the Japanese 10th division (with around 25,000 men and about 100 tanks and armored cars) had reached Taierzhuang. The trap was full and ready to be sprung...

The game map covers the Taierzhuang district, which includes the walled town of Taierzhuang and its surrounding environs and villages. Units are battalion/company level representing both the Nationalist Chinese and Japanese forces. The game is played in 13 turns, each of which represents a day. The game uses an area movement/impulse action system made famous by Storm Over Arnhem, but heavily modified by a tactical chit system which is the heart of the game. There are two sets of tactical chits (Nationalist Chinese and Japanese) that represent various battlefield advantages and events. These are played by both sides to either help their attacks and defenses (or hinder those of their opponent). The game also contains random events and various optional rules to give a diverse range of variations to both sides' play. The game is designed to be easy to learn, re-playable and very interactive to play but still be a challenge for both sides.


Storm Over Taierzhuang and issue #25 of ATO