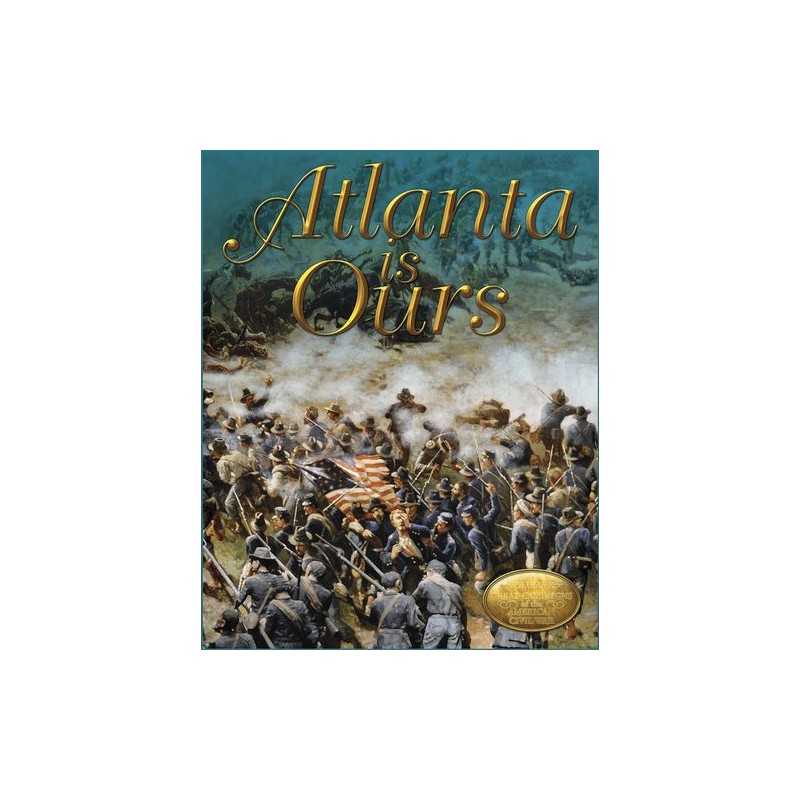 Atlanta Is Ours is the next game in the award-winning Great Campaigns of the American Civil War (GCACW) series. The two maps included are painted by original map artist Charlie Kibler. The military unit counters have been redesigned by Charlie Kibler to harken back to the counters in the original games in the series but with a more modern graphical treatment.

Atlanta Is Ours is the next game in the award-winning Great Campaigns of the American Civil War (GCACW) series. The two maps included are painted by original map artist Charlie Kibler. The military unit counters have been redesigned by Charlie Kibler to harken back to the counters in the original games in the series but with a more modern graphical treatment.

Atlanta Is Ours contains an updated version of the GCACW Standard Basic Game Rules that all the other games in the series use. The Advanced Game rules are also standardized so players will be able to move quickly from one campaign to the other.

The Opportunity of a Lifetime (Snake Creek Gap/Resaca (5/9/1864, 1 turn, small forces): Beginner’s scenario, great for learning how to play.
The Gap Is Blocked (5/8-5/10/1864, 3 turns): Hypothetical scenario, what could have happened if Sherman had not sent McPherson to Snake Creek Gap and instead attacked or tried to outflank other points in the Confederate defenses.
Battle of Resaca (5/14/1864; 1 turn): Sherman's entire army reinforces McPherson's corps outside Resaca, and attacks Johnston's army in Resaca, which has just arrived from its positions around Dalton.
From the Oostanaula to the Etowah (5/17-5/23/1864, 7 turns): Sweeping maneuver from one river to the other, with the aborted battle of Cassville near the end of the scenario. Includes special random events and optional limited intelligence.
Advance and Retreat (5/19-5/22/1864; 4 turns): Johnston's army attempts to attack a portion of Sherman's army while Sherman is advancing on a wide front. Hood aborts the attack as it is developing and falls back into a defensive line near Cassville.
The Hell Hole (5/25-5/28/1864; 4 turns): Sherman moves off the rail line to the west in an attempt to flank Johnston, but is stopped after several days of battle. This scenario encompasses the battles of Dallas, New Hope Church, and Pickett's Mill.
Kennesaw Mountain (6-22-6/27; 6 turns): This scenario covers the battles of Kolb’s Farm and Kennesaw Mountain.
Crossing the Chattahoochee (7/3-7/8/1864; 6 turns): Johnston retreats from Kennesaw Mountain and then Sherman breaches Johnston's line covering the bridges and fords of the Chattahoochee River.
Battle of Atlanta (7/20-7/22/1864; 3 turns): Hood (now in command of the CSA army) attacks portions of Sherman's army twice, at Peachtree Creek and Bald Hill, but is beaten back with heavy losses both times.
Ezra Church (7/28/1864; 1 turn; half armies): Hood sends two corps to block Howard (now commanding the Army of the Tennessee), who is attempting to move around Atlanta from the west; they stop Howard, but incur heavy casualties in their attacks.
Wheeler's Raid (8/10-8/15; 6 turns; solitaire cavalry scenario): Wheeler moves north to disrupt the Union supply line around Dalton; -Wheeler does minimal damage before being forced to retreat.
Kilpatrick's Raid (8/18-8/22/1864; 5 turns, cavalry scenario): Kilpatrick takes the Union cavalry south around Atlanta to Lovejoy's Station, but he does minimal damage and returns to Union lines.
Marching On Tara (8/28 - 9/1/1864; 5 turns): Sherman moves around the west flank of the Confederates and marches to the RR stations supplying Atlanta from the west and the south. The goal is to force the Confederates to fight outside the forts or abandon Atlanta. Tara is the fictional plantation in the movie Gone With The Wind, and is "located" a few miles from Jonesboro where the armies have their final battle.
Last Stand At Tara (8/31 - 9/2/1864; 3 turns): This scenario encompasses both the Confederate attack on the Union at Jonesboro and then the Confederate retreat and consolidation of their army at Lovejoy’s Station to the south on the RR line.