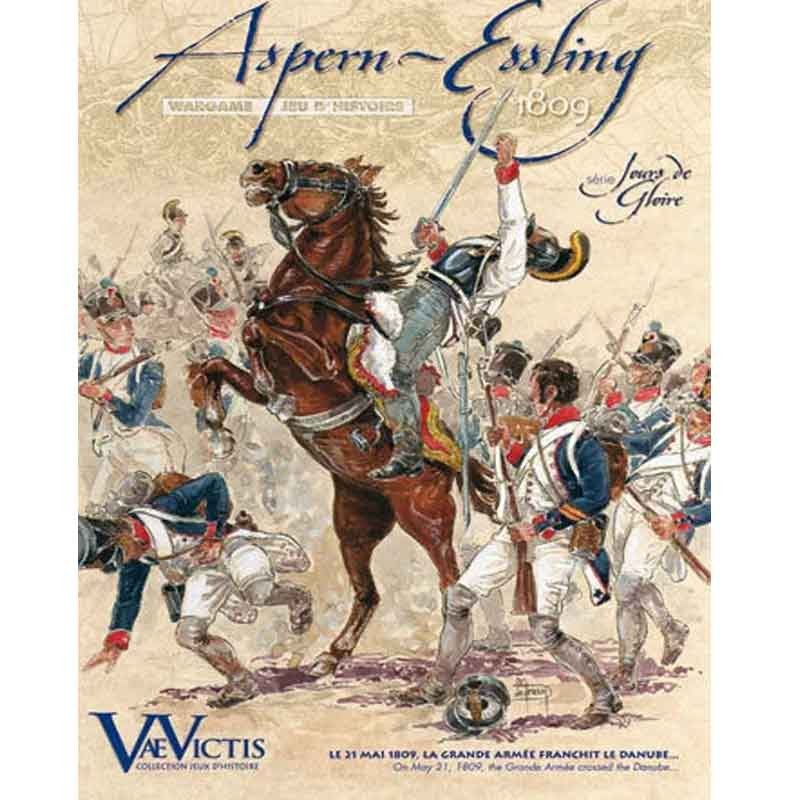 Aspern Essling 2nd Edition es a volume of Jours de Gloir series. On April 24, 1809, Napoléon had proclaimed at Ratisbon, « We will be in Vienna in less than a month ! ». Although he did seize the Austrian capital on May 13, the Danube still separated the Emperor from the army of the Archduke Charles.

Game description
To pull off a decisive victory, he now had to force a crossing of the river and defeat the Austrians as swiftly as possible. On May 20 in mid-afternoon 200 skirmishers of Molitor’s division crossed the backwater which separated the island of Lobau from the left bank of the Danube. By the next day, a beautiful Pentecost Sunday, the French were on the left bank with 30,000 men, including 6,000 cavalry, and were ready for battle. Grounded on the villages of Aspern and Essling and covered on the wings by the river, their base was solid. For his part, the Archduke Charles decided to go over to the attack quickly so as to destroy the troops who had just crossed the Danube. He had over 60,000 men available, organized into five columns, and before long the Austrians would have 90,000. After the battle had begun, several of the bridges over the Danube were temporarily broken, preventing the French from receiving the reinforcements necessary for victory. During the two days of May 21 and 22 the divisions on the ground, commanded by Masséna and Lannes, would have to resist heroically as the enemy launched a series of massive assaults. The victory was delayed until later : in less than three months, that would be Wagram !

Aspern-Essling 1809 is the 26th battle of the series Jours de Gloire, launched in 1997 with Rivoli 1797 (Vae Victis n°18). The game covers the two days of the battle (May 21 and 22, 1809), with special rules dealing with the command situation of the French army (Lannes and Masséna). The bridges between the island of Lobau and the left bank of the Danube also hold an important place in the simulation.

Aspern-Essling 1809 includes :
a 59 x 40 cm map,
216 double-sided die-cut counters and markers,
a color rulebook with scenarios and a player aid.