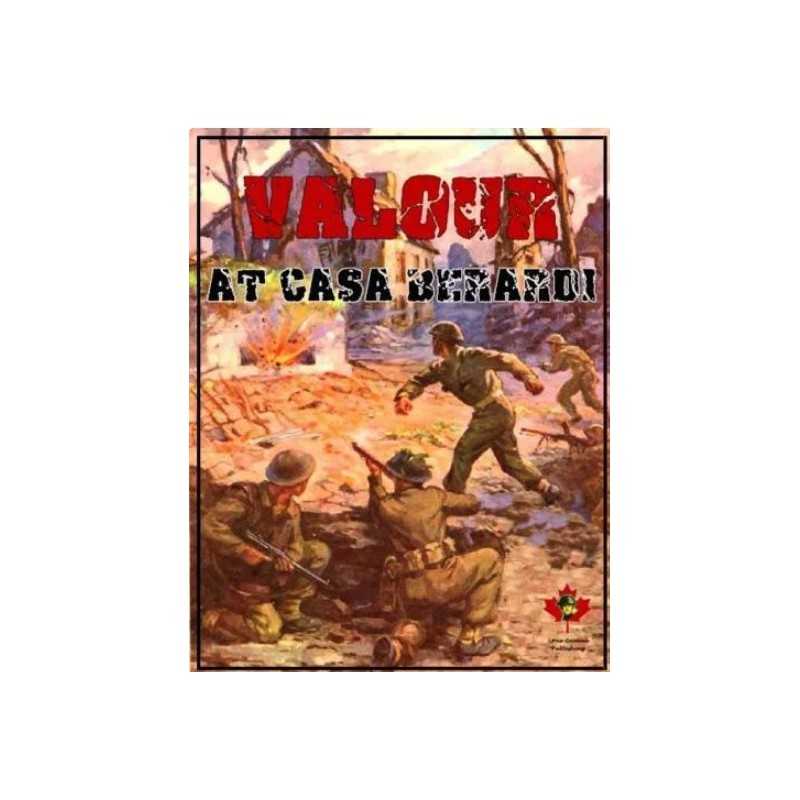 Valour at Casa Berardi covers the actions around Casa Berardi by the only all French-Canadian unit, the Royal 22nd Regiment. Commonly called the Vandoos, this unit distinguished itself during World War II. Casa Berardi features a historical map and 4 scenario mini-campaign.

This four-scenario pack is played on an 18 x 24, 1" hex custom map, revolving around the French-Canadian Royal 22é (Vandoo) Regiment's advance towards the "CIDER" crossroads and their valiant defence of Casa Berardi against the Fallschirmjägers of the 1.Fallschirmjägersdivision.

CASLO-1 Onwards: The Vandoos were tasked with advancing up the Orsonga-Ortona Road and capture the "CIDER" crossroads. The Vandoo's C Company, under the command of Captain Paul Triquet led his men towards the crossroad, when they came under heavy mortar and machine-gun fire. Unable to move, the Vandoos were raked merciless by the unrelenting fire and soon casualties began to mount.

CASLO-2 The Only Safe Place: Supported by the tanks of the Ontario Regiment, the Vandoos set out towards their objective of the "CIDER" crossroads. In their path were men and panzers units of the elite German 1st Fallschirmjäger Division, who raked the Vandoos with heavy mortar and machine-gun fire. As the Vandoos' casualties started mount, Captain Triquet ordered his men to the only safe place - the stone manor house of Casa Berardi.

CASLO-3 They Shall Not Pass: Captain Triquet and what was left of his company, along with three Ontario tanks, and Royal Canadian Horse Artillery's FOO, Lieutenant McDonald gathered about the stone manor house of Casa Berardi ready to receive the Fallschirmjägers attack. Wait long the French-Canadians did not have to wait. The Germans launched piecemeal attacks from the north, east, and out of the gully to the south.

CASLO-4 Valour at Casa Berardi: At 07.30 hrs, the Vandoos started out for Casa Berardi under heavy shellfire, crossing the “Gully” at a point deemed “its least formidable”. Once across, “C” Company, under the command of Captain Paul Triquet, was ordered to perform a right flanking manoeuvre, which would enabled the remainder of the Battalion to attack Casa Berardi from the front. “C” Company, apart from Captain Triquet himself, was reduced to a fighting strength of two sergeants and fifteen men, armed with small arms, and a woefully low on ammunition; while the accompanying Ontarios, under command of Major “Snuffy” Smith, had four tanks left- two of them bogged in the thick mud nearby. Captain Triquet decided that with the Germans to the front, on the flanks, and in behind them, “The only safe place was on the objective itself!” and with these slender resources, organized his defences against a counter-attack; issuing the order Ils ne passeront pas (They shall not pass!). Surrounded, the handful of men drew back from the crossroads; however, the battle was not yet done. The Germans persisted in trying to overrun the handful of French- Canadians lodged around the farmhouse; launching infantry and tank attacks piecemeal against the Vandoos, as they arrived..