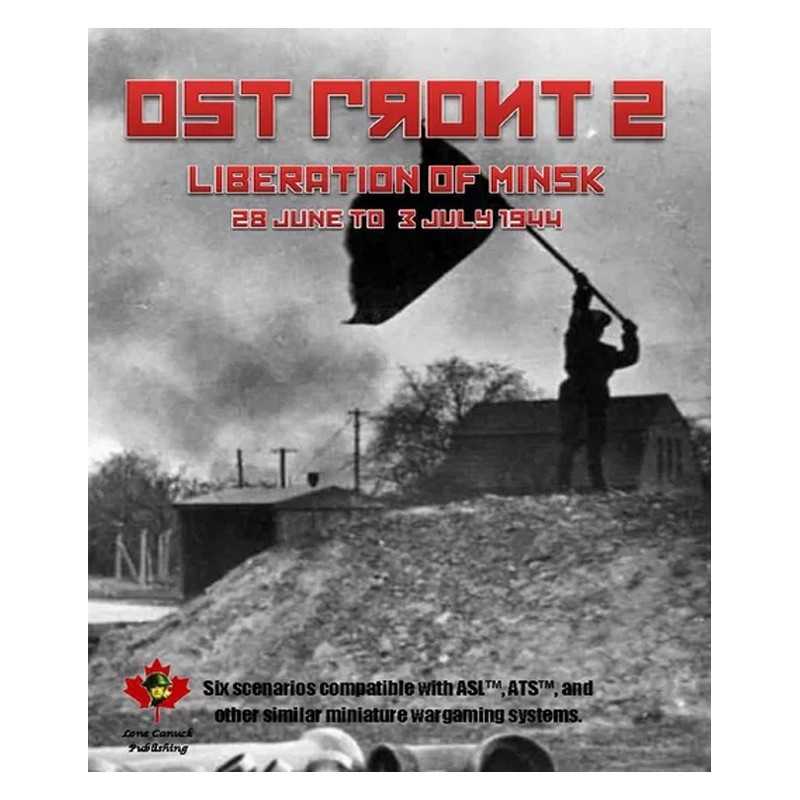 6 Scenarios for Advanced Squad Leader depicting the Soviet's drive for Minsk during Operation Bagration, the last week of June 1944.

6 Scenarios for Advanced Squad Leader depicting the Soviet's drive for Minsk during Operation Bagration, the last week of June 1944.

The Germans have deployed the 5th Panzer Division to Minsk, hoping to keep the escape routes open in the face of the onslaught of Red Army juggernaut. The Soviet armoured forces have burst through the German Army Group Centre's defensive front and are streaming westwards. The 5th Panzer Division, a formidable unit with near 300 tanks, and reinforced with Tiger Is of Schewere Panzer Abteilung 505, must fight to keep the roads and rail lines open, allowing for the remnants of the German 4th Army to escape.

Krupki Station, Russia, 28 June 1944: On 22 June, three years after the German invasion of the Soviet Union, codenamed: BARBAROSSA, the Red Army launched its own offensive, Operation BAGRATION in Byelorussia. By 28 June, the Red Army steamroller smashed through the German defences of Army Group Centre and were closing in on the city of Minsk. Hastily the Tigers of Schwere Panzer Abteilung 505 was rushed forward to a railway station outside the village of Krupki to block the Russians and keep the highway open...
GERMAN FORCES: 3x AFV
RUSSIAN FORCES: 10x AFV
BOARDS: 4, 5, q, x
GAME LENGTH: 4.5

Borisov, Russia, 30 June 1944: The Soviet armoured spearheads were unstoppable - the Germans could only hope to buy time for the evacuation of Minsk. As five rifle divisions of the Soviet 11th Guards Army closed with Berezina River, the lead armoured foreces of the 3rd Guards Tank Corps smashed its way into Borisov, attempting to capture the bridges over the Berezina from the Germans who were trying to hold them open as long as possible to allow forces to evacuate across them...
GERMAN FORCES: 8x Squads, 3x Leaders, Fortifications
RUSSIAN FORCES: 15x Squads, 3x Leaders, 10x AFV
BOARDS: 8, 51
GAME LENGTH: 8

Minsk, Russia, 3 July 1944: The Soviet Armoured spearheads closed in on the city from the North, East, and South; standing in their way was 1,800 poorly organized troops who were tasked to keep at bay, while the 35,000 unarmed stragglers, wounded, and rear echelon staff from Army Group Centre Headquarters could flee the city by train. In the early morning hours, the Soviets load up as many infantry as possible on to its tanks raced forward...
GERMAN FORCES: 7x Squads, 2x Leaders, 1x Gun, Fortifications
RUSSIAN FORCES: 7x Squads, 2x Leaders, 7x AFV
BOARDS: 1, 49
GAME LENGTH: 5.5