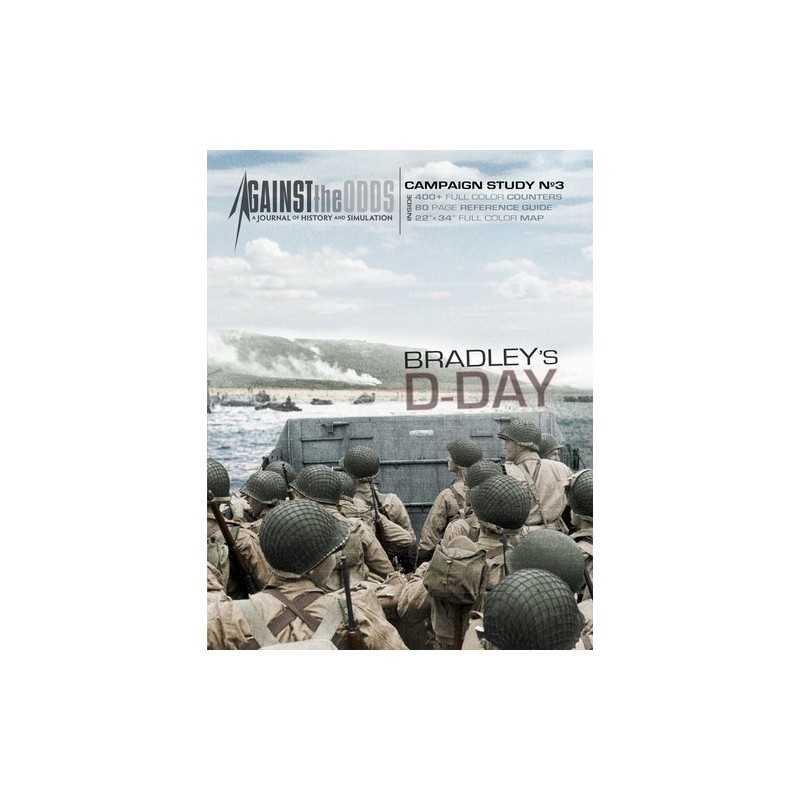 Bradley’s D-Day looks at the American efforts all along the right flank of the Normandy landings. While Utah seemed relatively easy, it was there, at Omaha Beach, where the Germans came closest to derailing the greatest sea-borne invasion of all time. Behind both beaches, two famous airborne divisions were scattered all over the countryside, and fought by twos and twenties to accomplish a semblance of their missions.

Call it the “Longest Two Days,” because that is the time-period covered in Bradley’s D-Day . Forty-eight hours of some of the most critical action in American history.

And, something people really asked for in Monty’s D-Day comes to pass here, as Bradley’s D-Day includes rules and special tables for solitaire play.

But that’s not all!

See what ATO means by "Campaign Study," with a separate 64 page booklet where every article is focused on the history behind the game. This companion study looks at the battle from all angles, with complete orders of battle and some fascinating insights into the real stories behind the battle– the intelligence build-up, the impact of the terrain and weather, air operations, support units, and deception efforts on both sides…all factors shaped the way things turned out.

Better than a history book, you can read the articles and watch the action unfold before you on the game map.

If you think you've seen it all with D-Day games check out the design innovations you'll find in Bradley’s D-Day . The key units are all here, including engineers with special abilities, DD-tanks, parachute and glider landings, and even railroad coastal artillery

One key feature of the game is unit deployment. A unit can be deployed in one of two modes: Movement Mode allows for the greatest movement but the weakest combat (which is not to say those units can’t fight) and Combat Mode, which allows the strongest fighting abilities (but still some movement for most units).

Bradley’s D-Day offers an intriguing scale, a moderate level of complexity, and an ease of play that will make this game either a fine addition to your Overlord collection, or a good first start for those who have not already focused on this campaign. We will start shipping this game in June 2011.

This boxed game is not a part of your subscription and must be ordered separately. But current ATO subscribers qualify for substantial savings. We've combined good game design with specialized research to give you fresh insights into campaigns you thought you already knew....

And yet it’s not quite true that everything in the issue is about the American D-Day battle. Also included is a bonus mini-game: War With a Vengeance!, that covers the two-month V-1 campaign which amounted to a “Second Battle of Britain.” Paul Rohrbaugh’s design pits an escalating level of British air defense against the world’s first “cruise missile,” the “doodle-bugs” that brought high explosives and Hitler’s efforts at “revenge” to southern England at 400 mph. The Allied player gets a variable collection of high performance fighters (including the first Allied jet - the Gloster Meteor) plus ground defenses and representation of the Royal Navy.

The German player allocates his V-1s per target and time of launch, aiming to fool and overwhelm the defenders, perhaps even completely disrupting the Normandy landings! Random events add chaos and surprises, while the Allied player can choose which path to follow - focusing entirely on stopping the V-1s or allocating resources to the D-Day beaches to speed up ground efforts to capture the launch sites. The choices are yours, in this tense little game with 100 counters and a full color, 17x 22” map. .