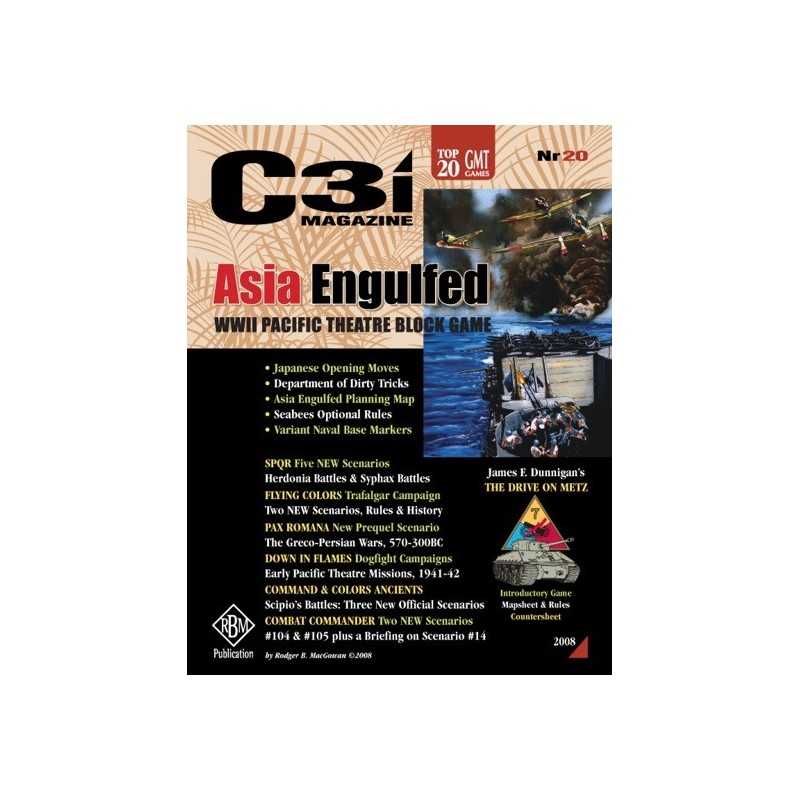 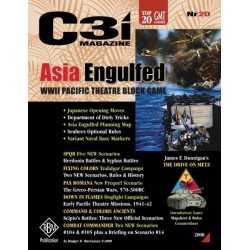 # New complete game included in "C3i Magazine" Nr20, "The Drive on Metz" designed by James F. Dunnigan. This 2-player game recreates General Patton's attempt to seize the key city of Metz and to get across the Moselle River before the retreating Germans can form an effective defense. The U.S. forces comprised of three divisions of the 20th Corps had just completed an epic pursuit across France after the Allied breakout from the Normandy beachhead. The exhausted Allied forces were at the end of their supply line and has barely enough resources left for one last push. If they had been able to get across the Moselle River, they would have compromised the entire German Westwall defenses. This would have enabled Patton to make an attempt at crossing the Rhine before the end of 1944 and might have ended the war months earlier. The defending German forces, four divisions of the 82nd Corps of the German 1st Army, were a combination of hastily collected and organized units, including fresh units from the German interior and remnants of units that Patton had been pursuing across France. The battle, which began on 7 September 1944 and lasted for about a week, was a singular opportunity that could have gone either way. Historically, the Germans won, but just barely. This "Special C3i Magazine Game" includes all the components you will need to play this exciting game -- mapsheet, counters, charts and rules. Also included in this issue will be two articles by James F. Dunnigan: "The Drive on Metz Sample Turns and Strategy Notes" and "Wargames Live, In A Place You Can't Visit".

#A "Combat Commander" Briefing: Examining Scenario #14 - "At the Crossroads" by John Foley, Kai Jensen and Chad Jensen (designer). This second "CC" scenario briefing (C3i Nr19 covered "CC" scenario #10), is by John Foley ("CC" series developer) and Kai Jensen ("CC" playtester). These two individuals each write up a sample setup for the German defenders in scenario #14 "At the Crossroads". These were each done in isolation so that one had no idea of what the other was planning. They then swapped files and did a sample setup for the Polish attackers based upon the other's German defense.

# New C3i "Combat Commander" Scenario #104 "Go For Broke" by Gregory L. Wong. This scenario takes place in the Vosges Mountains, Alsace, France, 28 October 1944 and features the 442nd Regimental Combat Team which was made up of "Nisei" 2nd generation Japanese-Americans. The situation is the 1st Battalion, 141st Infantry Regiment has been cut off behind enemy lines and the 442nd RCT is ordered to attack and rescue the "lost battalion".

# New C3i "Combat Commander" Scenario #105 "La Fiere Counterattack" by Dan Holte. This scenario takes place in the La Fiere Causeway, France, 6 June 1944. The situation finds paratroopers of the 82nd Airborne 505th PIR battling the German 1057th Grenadier Regiment in the causeway and for the bridge across the Merderet River.

# New C3i "Commmands & Colors Ancients" Scenarios, "The Twin Thunderbolts: Gnaeus and Publius Scipio in Spain" during the Second Punic War by Richard Borg and Dan Fournie. These three new "C&C Ancients" scenarios feature the Roman-Carthaginian battles of "Cissa, 218 BC", "Iliturgi, 215 BC" and "Castrum Album, 214 BC".

# New "SPQR" Great Battles of History scenarios "The Battles of Herdonia, 212 & 210 BC" by Dan Fournie. Two classic battles of envelopment, scaled down to one-quarter of Cannae's monumental size on the field before Herdonia. Hannibal leads his Carthaginian forces against Rome's veteran Vth and Xth Legions under Consul Fulvius.

# "Dogfight Campaigns" for "Zero!" in the Down in Flames Series by Joe Silva. For many players, the best part of playing the Down in Flames Series of games is the dogfights. They are quick to setup and to play and you don't have as many rules to remember. However, one of the challenges to flying dogfights is finding interesting dogfights that are balanced. Joe has designed a Dogfight Campaign System for use with "Zero!" so you can create balanced dogfights.

# "Designing Game Designers" - Old School Instruction for the Next Generation by Alan Emrich. From one of the true statesman of the wargame hobby and industry, Alan has learned that playing games is great, making games is better, designing games is better still, but designing game designers is the best of all. As a college instructor teaching game design, prototyping, and project management, Alan shares with us his knowledge, experience, and wisdom from over 30 years in the trenches.

# "Stalin's War" Designer's Notes by Ted Raicer. Ted's behind the scenes report on this new P500 title details his aim to create a relatively simple WWII East Front game with lots of flavor, taking advantage of the ability of "Card Driven Game" mechanics to introduce lots of "chrome" at minimal cost in complexity. And to allow players to still enjoy the traditional pleasures of hex-based operational maneuver. With "Stalin's War" Ted's design has recreated the great armored thrusts and pocket battles of WWII, and depicts the command limitations, limited intelligence, and historical flavor only a CDG can capture.