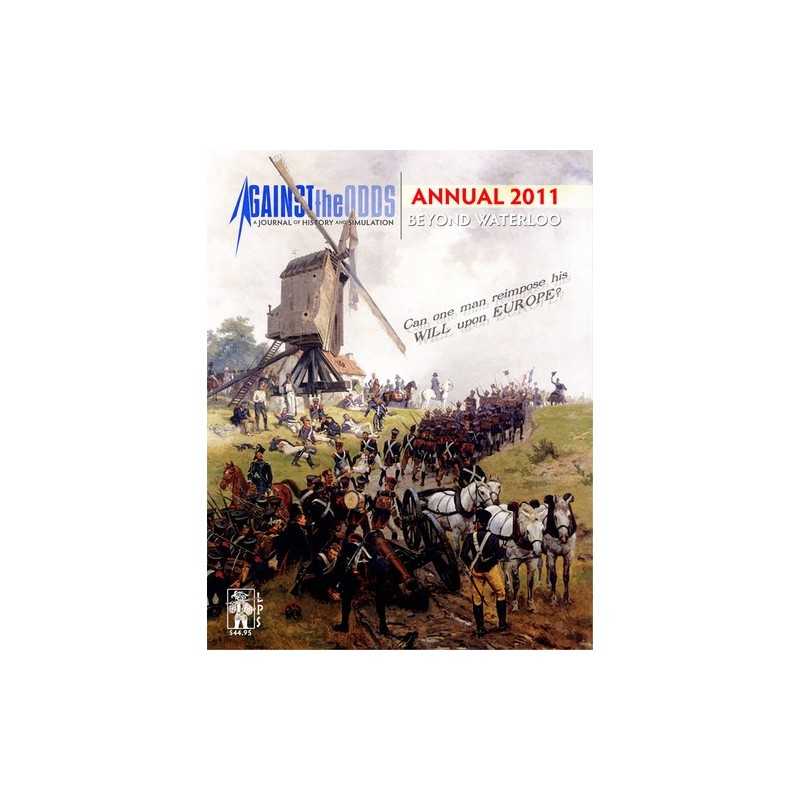 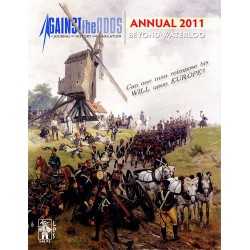 Not exactly. And much more.

While most “Waterloo games” either lock players into the circumstances of that famous battle, or give some small leeway into the overall circumstances of the “100 Days” battles in Belgium, they all suffer from a similar narrow focus. You will have the Armée du Nord face some combination of Blucher and Wellington and everyone just does the best they can.

But any reading of the 100 Days shows a flurry of activity—key, historical events—which no one has bothered putting into game form. Until now.

Beyond Waterloo, designed by John Prados, begins with Napoleon entering Paris and the Coalition Allies facing choices about what to do about this.

We’ve all read the events that follow. Napoleon feverishly works the diplomatic channels while trying to reform a government and rebuild something like La Grande Armée. The allies put aside their quibbling over the new lines on the map of Europe, declare Boney an “outlaw,” and start mobilizing about a million troops to invade France.

Repeat, Beyond Waterloo begins with Napoleon entering Paris. Each player gets to pursue these grand strategic paths we’ve all discussed about many times but never gamed. The map includes France—ALL of France—plus Belgium, Spain, Germany, Switzerland, and Italy. Get the picture? This time, the players will have different choices. “Beyond Waterloo” means WATERLOO MAY NOT HAPPEN AT ALL! Or if it happens, the players will be part of why it happens!

This is a rare opportunity for some genuinely alternative history exploration. The game involves military, economic, and diplomatic paths, and totally new design elements. Because of the complexity and “newness” of many approaches, the game offers a layered approach, beginning by teaching players a new way of having combat that is both strategic and nuanced for the era. And yes, you can fight “just the Battle of Waterloo” if you wish! At the next level of instruction, we get to the “Basic game.” (Yes, when have you seen “phase 2” in complexity called “the Basic Game?” ) Here the players begin to deal with strategic issues, economics, administration systems, and other factors scarcely deal with in any game, much less one on the 100 Days. As players work up to the Advanced Game, they include diplomacy, force mobilizations, politics, and how each of these impacts and molds grand strategy.

Beyond Waterloo gives players the first ever chance to actually PLAY the situation we’ve all read about regarding Napoleon’s return. Now the varied circumstances in Switzerland, Spain, the Vendee, disgruntled allied countries (who aren’t getting what they wanted at the negotiation table), spy networks, and the politics of Paris are all PART of the game. Yes, you’ll find the familiar names of Wellington, Ney, and Blucher included, but also Soult, Schwarzenburg, Charles, and even Murat’s bizarre effort in Naples.

John Prados has been part of some of gaming’s real milestones… Rise and Decline of the 3rd Reich, Army of the Heartland, Campaigns of Napoleon, Panzerkrieg. For ATO, he’s delivered award winners like Fortress Berlin and Khe Sanh, 1968. Beyond Waterloo sets another milestone that gamers will talk about for years to come.

This is the Waterloo game serious students of the end of an era have been looking for. The 2011 Annual will be a landmark of historical gaming. Make sure you get yours now!

Bonus Item: In the summer of 1921, despite multiple attempts at technical and personal sabotage, Billy Mitchell's bombers sank a German submarine, destroyer, light cruiser, defunct US battleship... and the "unsinkable" dreadnought Ostfriesland. His vocal reports of what airplanes could do to battleships lead to his court martial...but other nations were paying attention. The enclosed TSS mini-game with this issue shows one of the results.