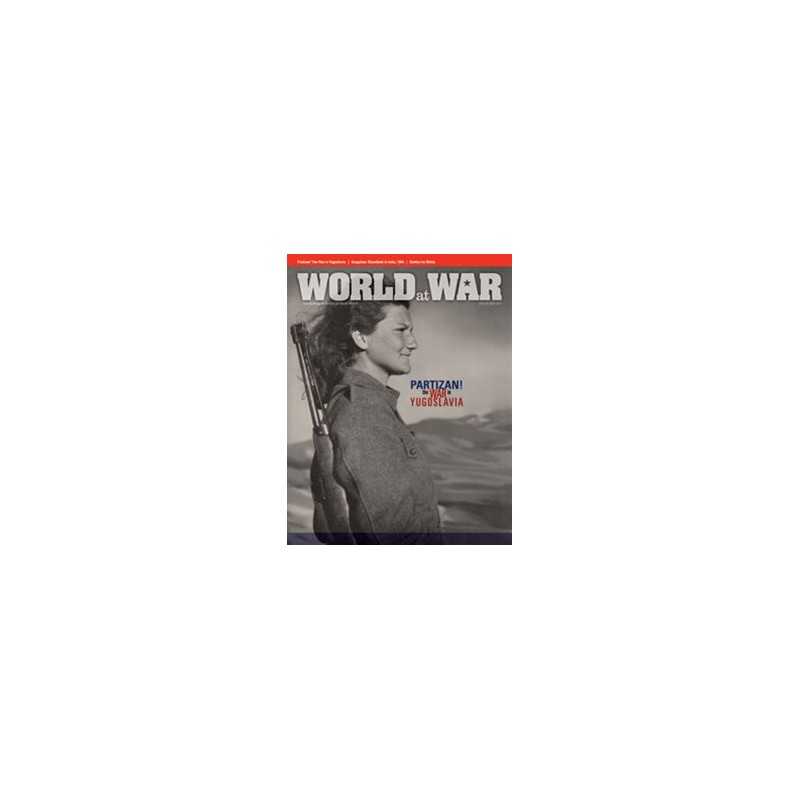 Partizan is a two-player, intermediate-complexity, historical simulation of the struggle between the Communists and the Axis occupation forces for mastery of Yugoslavia from 1941 through 1944. It starts with the first uprisings against the Axis in Bosnia, Serbia and Montenegro in late 1941, and ends in late 1944 just before the Soviet Army entered the country.

Partizan is a two-player, intermediate-complexity, historical simulation of the struggle between the Communists and the Axis occupation forces for mastery of Yugoslavia from 1941 through 1944. It starts with the first uprisings against the Axis in Bosnia, Serbia and Montenegro in late 1941, and ends in late 1944 just before the Soviet Army entered the country. The game is won by the Partisan player by waging an aggressive guerilla war: harassing the occupiers and destroying infrastructure that may be of use to them: warehouses, fuel dumps, bridges, dams, depots, railroads, viaducts, motor pools, etc (each represented by variably placed counters). “Resource hexes” represent strategic mineral deposits, such as bauxite, copper and chromium, which the Axis player must protect, along with routes from them back to Germany, while also guarding possible invasion beaches along the coast.


During the game, the exact strengths of Partisan units are mostly unknown by the Axis player (via “tried” and “untried” counter-sides). He must attempt to head off Partisan operations while never certain exactly where they’re headed. The Partisan player must select his targets carefully in order to disrupt the occupation enough for him to win the game, while avoiding becoming surrounded and destroyed by the Germans in the process.


The counter-mix includes the full German, Italian, Hungarian, Croatian, Bulgarian, and Ustashi orders of battle, as well as all the Partisan forces and Marshall Tito himself (the Chetniks are handled abstractly). The Partisans may even expect support from the Anglo-Allies if the guerilla war against the Axis is going well, including possibly an amphibious invasion by the Anglo-Americans (“Operation Armpit”). In fact, most of the main Axis' operations in Yugoslavia historically pertained to the protection of their coastal flank. Their primary anti-partisan offensives were intended to clear the guerrillas from the coastal areas where an Allied invasion was possible. In game terms, the "Allied Landing Scare" rule simulates the reality of German strategic fears in the Balkans.


Axis forces, especially the Germans, are generally stronger than the partisans, but the partisans are elusive and difficult to catch, often forcing the Axis player to spread thin his forces. Partizan has been designed by Javier Romero (Triple Alliance War) and developed by Eric Harvey (AETO, APTO & AOI). It contains one 34x22” extra-large-hex map and 228 iconic and NATO-style counters. Units of maneuver are brigades and divisions. There is one grand campaign scenario, which can be completed by two players in about five or six hours. Solitaire play is doable.

Articles in this issue:

Partizan! The War in Yugoslavia. The story of the bloody German occupation of the Balkans, 1941-45.
Malta Invasion Plan. The Germans and Italians never invaded Malta, but we have their detailed plans for doing so.
The German Poltava Raid: Start of the Cold War? For a time US bombers based out of the liberated Ukraine. Stalin then decided he didn’t like the idea.