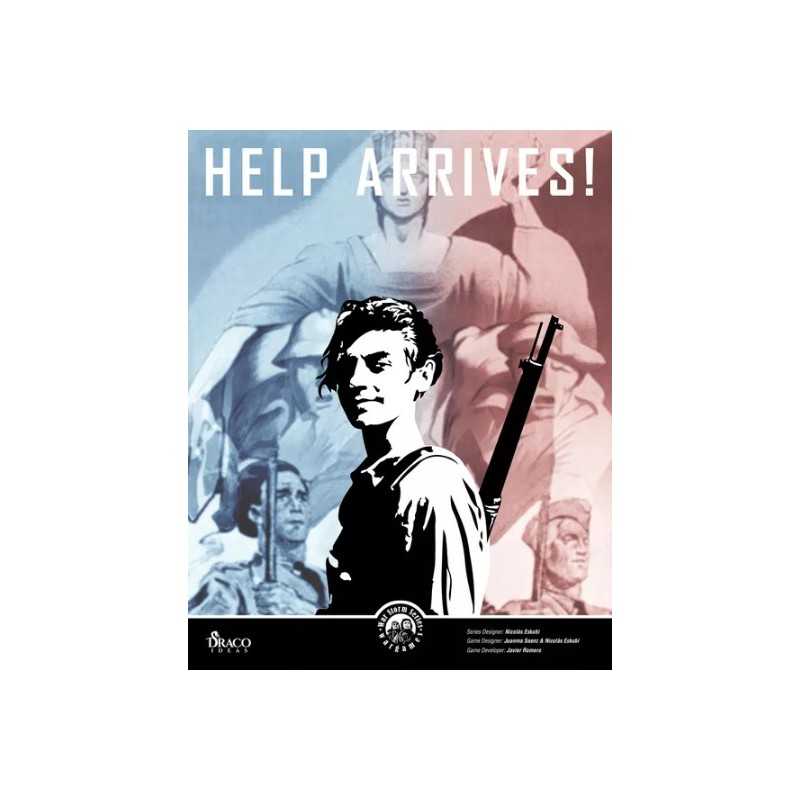 Help Arrives! (HA) is a stand-alone game in the War Storms series 100% compatible with A las Barricadas! including the international help received by the Nationalist and Republican as well as many other units that fought on both sides during the SCW: The International Brigades, the Italian Corpo Troppe Volontarie (C.T.V.)

On 18 July 1936, various generals in the Spanish army rose up against the government of the Second Republic. The failure of the coup as it had been originally planned gave way to a civil conflict between the defenders of the democratic government and the backers of the military coup. Machado’s two Spain's fought each other for nearly three years in a battle which reflected the political and social tensions affecting the world at that time.

The opposing armies were very different: on one hand, the Republican army possessed a limited number of professional soldiers and many popular militias belonging to political parties and labor unions. To this were added the International Brigades, formed from foreign volunteers of diverse origin; a fighting force which was highly motivated, but poorly coordinated and typically poorly organized. On the other hand, the Franco´s army had most of the professional military, along with Carlist and fascist militias, many native Moroccan troops, and the volunteers of the Condor Legion and the Corpo Trupe Voluntarie, sent by Hitler and Mussolini, respectively.

From a military point of view, the Spanish Civil War presaged the global conflict which would soon erupt. In the mid-1930s, military high commands from all over the globe theorized on the possibilities of motorized armies and “lightning war”. Both Nazis and Soviets rehearsed armored tactics in Spain, and tested various types of weapons. In addition, the importance that air superiority would have on all later conflicts was made clear. All of these elements make the Spanish Civil War a fascinating conflict from an historical point of view and with regard to military strategy.

Help Arrives! (HA) is a stand-alone game in the War Storms series 100% compatible with A las Barricadas! including the international help received by the Nationalist and Republican as well as many other units that fought on both sides during the SCW: The International Brigades, the Italian Corpo Troppe Volontarie (C.T.V.)

HA while utilizing "PTH" base rules, incorporates new and adapted rules and additions for this new tittle. The WSS promises many hours of fierce fighting between the infantry, tanks, artillery and aircraft belonging to the armies enveloped in this conflict. Just a few of the additions include:

HA has a moderate complexity with good solitaire suitability. The system emphasizes the role of officers. Officers can activate units, coordinate with other officers and their units, call for artillery support, air support, influence moral checks, coordinate assaults, and much more. Rules for special actions.

Based on the principle of simultaneous execution, or simply "WE GO", a hybrid system of turns and "real time". The players must activate unit leaders to perform many actions (fire, assault, move, coordinate, etc). A turn ends when both players have completed all their activations. The scale is platoon level with units

The game uses isomorphic mapboards, each of which are aligned to any edge of equal length on any other mopboard. This allows for an almost unlimited number of combinations to create any terrain situation, including player designed scenarios. Each map hex represents a distance of approximately 150 to 200 metres.