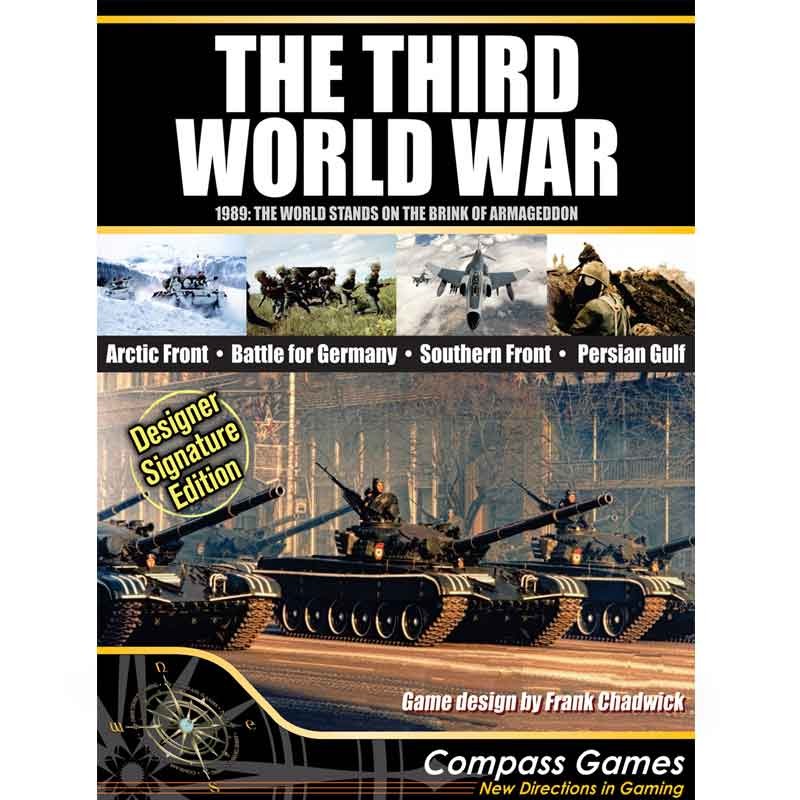 This edition of The Third World War features many new enhancements and larger counters and is another Classic Reborn!

The complete Third World War game series is included which is comprised of the following four games:
Third World War (subtitled Battle for Germany) is a game of the struggle for central Europe by the forces of NATO and the Warsaw Pact.
Southern Front: Race for the Turkish Straits adds Bulgaria and Romania, reinforced with three Soviet armies and special-capability forces, face Greece, Turkey, and Yugoslavia, thinly reinforced with a few elite units from the U.S., France, and Italy.
Arctic Front: Battle for Norway covers the Soviet Leningrad Front, with its special airborne, amphibious, and arctic-equipped contingents, assault of Norway, reinforced with a few elite units from the U.S., Britain, Canada, and other NATO nations.
Persian Gulf: Battle for the Middle East includes a special "game within a game", covering the diplomatic, political, and military maneuvers by the Soviet Union and the United States in the Middle East before - and leading to - the general outbreak of the Third World War.
For the not faint of heart, combined game rules are provided to cover the entire Third World War that combines all four games in the series for a truly memorable gaming experience.

This Designer Signature edition pays tribute to the classic Frank Chadwick game series by honoring the original game system and keeping it fully intact (no design changes made), while introducing many enhancements for game play purposes.

In terms of superior physical presentation, all aspects have been upgraded, including completely new maps, numerous new player aids, markers, and unit displays, and redesigned and enlarged 9/16" counters. Some of the enhancements made in this edition include:

• All four separate games combined into one, comprehensive package
• Enlarged and redesigned counters from 1/2" to 9/16" size
• Added more information to counters such as: mobility class, stacking value, zoc type, chemical/nuclear/limited military ability
• Enhanced ergonomics are built into the set up and reinforcement charts
• Modified and adjusted unit colors to better distinguish between each other and between NATO/Pact/Neutrals
• Added and modified game markers including Strike markes with values on them, air superiority, weather, objective control, and generic markers
• Combined the seven maps from Third World War, Southern Front, and Arctic Front into four larger maps (22 x 34"), including adding the remainder of Poland and Western Russia; all while keeping the same area of the original games
• Combined four maps from Persian Gulf into two larger (22 x 34") maps
• Added and modified player aids such as: new display to aid with handling unwieldy stacks (use a marker on map to indicate stack of units and put the placement sheet
• Warsaw Pact ground unit counters with one step-loss (disruption) on reverse
• Addition of U.S. F-117 air unit for optional use. Also retains the U.S. F-19 air unit from the original game
• Player aid cards and associated markers, for tracking nuclear conflict level and nuclear attack points (NAPs), air transport points, and victory points
• Markers to indicate Norwegian Sea control and whether the Black Sea Fleet has sortied
• Optional tactical advantage rule
• Color-coding on Warsaw Pact ground unit counters for ease in distinguishing army designation
• Incorporated errata for unit set-up information and reinforcement schedule
• All-new rules treatment backed by many illustrations, an index, and clarifications and examples of play to reduce potential questions.

Product Information:
Complexity: 6 out of 10
Solitaire Suitability: 8 out of 10 (no hidden units)
Time Scale: 1 week per turn
Map Scale: 45 km per hex
Unit Scale: divisions, with some brigades and regiments, 100 aircraft per air unit
Players: one to two per individual game, one to eight for combined campaign
Playing Time: 6-10 hours per game, 36+ hours for full combined campaign