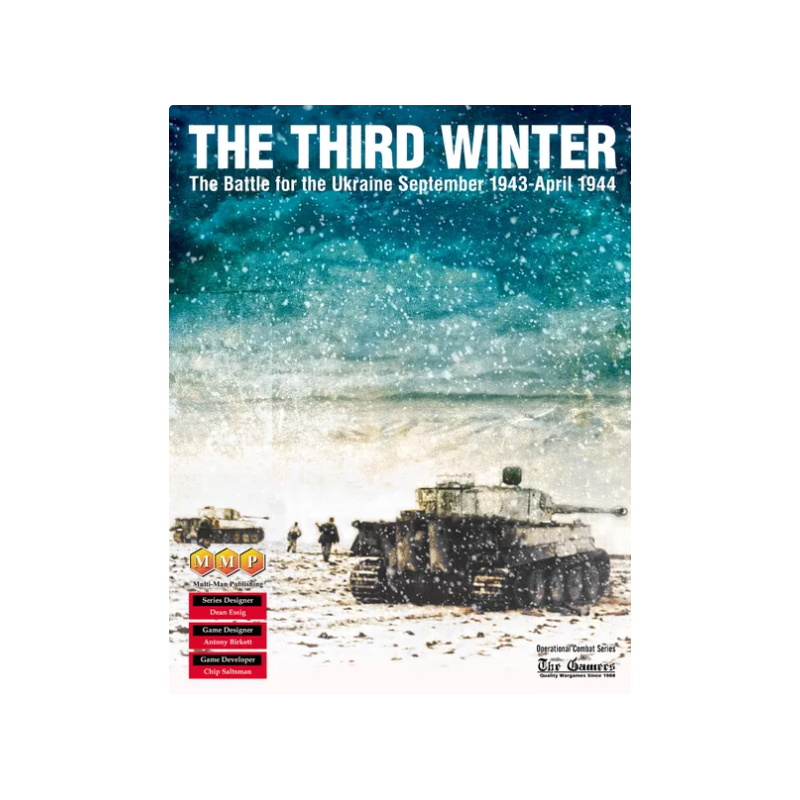 The Third Winter: The Campaign for the Ukraine, September 1943 - April 1944, begins with the “Race to the Dnepr,” as Army Group South rushed to a secure defensive position behind one of Europe’s largest rivers. Four powerful Soviet Fronts must be used in close cooperation to overcome the Axis forces, which include two Panzer Armies.

The Third Winter: The Campaign for the Ukraine, September 1943 - April 1944, begins with the “Race to the Dnepr,” as Army Group South rushed to a secure defensive position behind one of Europe’s largest rivers. Four powerful Soviet Fronts must be used in close cooperation to overcome the Axis forces, which include two Panzer Armies. The game contains 85% of the total Wehrmacht’s mechanized strength at this stage of the war and 75% of the Red Army’s. The Germans must hold the Dnepr barrier as long as possible, followed by a fighting retreat to the Carpathian Mountains to the west. The Soviets can crush the Axis invader with the advantage of their most reliable ally: General Winter. It is the Third Winter on the Russian Front.

The Soviets have the initiative and a formidable force, but an equally challenging task. The Dnepr is a huge obstacle and the German panzer formations are wounded but dangerous. The German player has the challenge of active defense in the style of Army Group South Commander Erich von Manstein. Both sides are in for a challenging fight.

The Third Winter is a big game, with 5-mile hexes, 3.5-day turns, and counters for units from battalions up to divisions. The battles from this campaign – the Race to the Dnepr, the Battle of Kiev, Korsun Pocket, the Kamenets-Podolsky pocket (“Hube’s Pocket”) and the splitting of Army Group South in two—merge into the dynamic of whole campaign.
Special rules in this 19th game of the Operational Combat Series have been carefully designed to recreate this intense campaign. They include:

• Soviet Front command structure is modeled by the four Fronts being either on Offensive or Paused posture. The Soviet player can switch one front “off” and another “on” to shift focus and force the Axis to deal with sudden threats in a different part of the map. When Soviet formations are burned out, they withdraw into the “RVGK” for rebuilding, and can reappear suddenly in a new area, enabling Maskirovka surprises. Each Front has a dedicated Air Army and Frontal Barrages to initiate offensives. The game shows the increasing strength and competency of the Red Army in both units and Action ratings.
• German units in play include Kampfgruppe Divisions, German Remnants, German Army and Army Group HQs,Tiger Companies, Hartman and JG52 aces, Hans-Ulrich Rudel and his tank-busting aircraft, and the Romanian Home army
• Random events similar to what are found in the award-winning Beyond the Rhine. These cover things like Soviet Patrol Boat Raids, Lend-Lease, Fuel Shortages, Heroes who affect combat, Arty Ammo Stockpiles, and Partisan Offensives. The 44 possible events add a lot of historical flavor but require very little rules overhead.
• The importance and difficulty of the Dnepr crossings are distilled into rules allowing the bridges to be blown and repaired, and ferries to be emplaced, all leading to Soviet Bridgehead battles
• Both sides were deploying more and more anti-aircraft assets, modeled with units that make air barrages more difficult.
• Axis Fortress HQ units that enable cut-off units to continue to function and shows the decline of the Wehrmacht, from a mobile warfare army to a defensive army, with limited counterattack capability. KG HQs allow ad hoc mechanized formations to combine to simulate the desperate nature of the struggle.