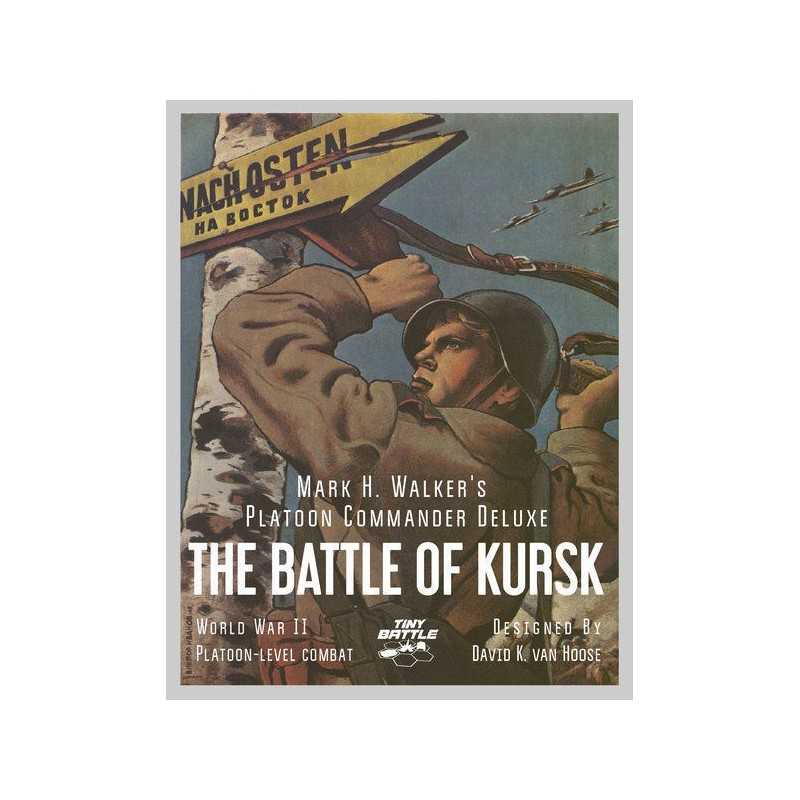 Platoon Commander Deluxe: Kursk (PCD:K) is the port of Tiny Battles’ well-known Platoon Commander system to Flying Pig’s big box, mounted map, large counter method of game publishing. Each game includes three mounted 22” x 17” geomorphic maps, and four sheets of thick (as in 2mm thick, wow these counters are so easy to pick up, thick, why haven’t wargames been like this forever, thick) 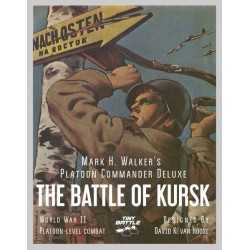 Platoon Commander Deluxe: Kursk (PCD:K) is the port of Tiny Battles’ well-known Platoon Commander system to Flying Pig’s big box, mounted map, large counter method of game publishing. Each game includes three mounted 22” x 17” geomorphic maps, and four sheets of thick (as in 2mm thick, wow these counters are so easy to pick up, thick, why haven’t wargames been like this forever, thick)

Kursk. Many historians believe it was the turning point of World War II. Kursk. Witness to the largest tank battle of the entire war. Kursk. The end of the myth of German invincibility. Kursk. Just one hell of a lot of fun to game with 1” square cardboard counters representing platoons of infantry and tanks and batteries of anti-tank guns, mortars, and stuff. And that is what you get with Platoon Commander Deluxe: Kursk.

PCD:K uses version 2 of the Platoon Commander rules, which are identical to the V1.5 rules released with the latest Tiny Battle Publishing Platoon Commander game, Poland Strikes, with the exception of enhanced artillery and new air strike routines.

Each turn is gamed through several phases. At the beginning of each turn, the players determine initiative with a unique dice-off system in which ties award the initiative to whomever lacked it the previous turn and applying the Commander's Focus to the roll might tilt the odds in your favor. Next, players will draw a scenario-designated number (usually just one) of Action Cards that may be used for anything from artillery strikes, through rally assists, to negating the opponent's just-played card. Then it is time to rally disrupted units with a simple 1d6 roll against a nationality or scenario-designated morale. Action Cards, in addition to the special Aid chit, may be used to improve a unit's chances of preparing for combat.

And then all hell breaks lose...

It's the Fire Phase and players alternate firing with individual units or stacks of units against in-range and in-sight enemy units. When firing on the enemy tanks, the target's Armor Factor is subtracted from the firing unit's Armor Piercing Factor, two dice are rolled, and the results checked on the appropriate column on the Fire Results Table, yielding a number of potential hits. The target rolls a die for each potential hit and compares it to his or her morale. Pass the morale check, that hit is negated. These columns and die rolls can be modified by the target's terrain, flanking fire, the Focus marker (represents the commander's presence), and most importantly Action Cards, which can grant column shifts or even allow the same unit to fire again, adding a delicious uncertainty that makes the game thrilling to play. Players continue to alternate attacks until neither wishes to attack.

Next comes the Movement Phase. Unlike the preceding Fire Phase, one player moves ALL his eligible units before the opposition gets to move. Certain units can move and fire or vice versa (with a penalty), unfired opposing units can opportunity fire on enemies moving within their line of sight. As in many other facets of the game, the insightful play of Action Cards during the movement phase is critical, allowing additional movement or opportunity fire conducted by units that have already fired. No PanzerBush tactics here, you never know when a unit will be able to fire on you. Exciting stuff.

Finally, we reach the Aid and Focus Phase. Platoon Commander eschews the use of HQs that can be unrealistically targeted. Instead both players have Aid and Focus markers, representing where the commander intends to place emphasis or send additional assets (ammunition, weapons, etc) or first aid. The placement of these markers provides combat and morale bonuses to the units underneath them. Additionally, if the player chooses, the Focus marker can be used to influence the initiative roll.

And that's a turn of Platoon Commander.

I hear that a lot. With all the tactical games on the market, what makes Platoon Commander Deluxe: Kursk different?

Clutterless counters. PCD:K uses color to determine a weapon's range. For example, an Armor Piercing factor printed on gold indicates that the weapon can fire normally at a target up to four hexes away.
Unique phasing. Players alternate attacking in the Fire Phase, but move all their units at once during the Movement Phase.
Flanking Friendly Close Assault Phase. Units do not enter the hex of the Close Assault target, but rather attack from adjacent hexes. This allows the attacker to not only amass the overwhelming odds needed to take that key position, but also attack from multiple directions, which provide a flanking bonus. Additionally, alternating attacks in the Close Assault phase allow defenders to conduct true spoiling attacks.
Ranged combat results are based not only an the target's armor factor and terrain, which determine the column on which the attack is executed, but also the target unit's morale which determines how many hits affected the target.
Artillery is card driven. Neither player knows the other's artillery capability by glancing at a scenario card. Artillery barrages are determined by Action Cards.
Action Cards. PCD:K is not card driven, but rather card assisted. The Action Cards provide artillery, rally units, provide combat bonuses, and even unexpected Opportunity Fire shots.
Focus and Aid Markers. These markers allow players to influence the battle much as their real life counterparts would. Players may choose to focus on a specific area, providing combat bonuses, or provide additional aid to those disrupted by fire.

It’s a system that grognards and newbies alike can enjoy. The counters are large, easy to read, and beautifully illustrated. There is no jungle of numbers to wade through; the range at which a unit can fire is indicated by the color of the placard (badge?) behind the attack factor. Although gamers need not fiddle with unit facing, simple rules account for flanking fire. And infantry isn’t forgotten either. Platoon Commander Deluxe uses a unique system in which infantry assaults from adjacent hexes, allowing commanders to concentrate overwhelming force at a critical point and even conduct flank attacks. And woe be the Tiger platoon caught unsupported in the midst of a city by a horde of Russian rifleman.