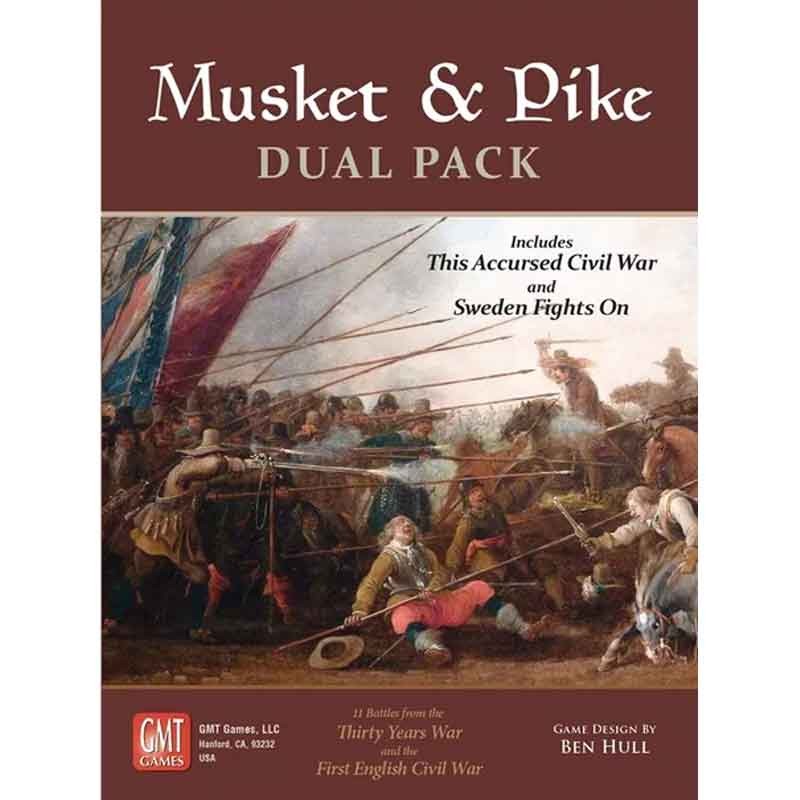 The award-winning Musket & Pike Battle Series was launched in 2002 with This Accursed Civil War and followed with Sweden Fights On within a year. Both have been out of print for over a decade. The series has marched on with four more installments and has attracted many new players. These first two games will be available again in a new, updated dual package. In one box, you will get the first two volumes of the MPBS

In one box, you will get the first two volumes of the MPBS including:
Two additional battles for “This Accursed Civil War:” Cheriton 1644 and Cropredy Bridge 1644. Both battles were in designer Ben Hull's original Desk Top Published version, with Cheriton 1644 appearing later in C3i. The Edgehill 1642 variant from Gustav Adolf the Great will be included as well.
For all battles, infantry and cavalry units will not be shared between battles for ease of setup and storage.
The battle specific cards introduced in Saints in Armor with be provided with Turn Track, Victory Conditions, Dead and Pursuit boxes to improve their utility (5 back printed cards)
The This Accursed Civil War Playbook will be brought up to the current series standard for ease of use.
Orders of battle and maps will be updated to reflect the latest scholarship.
Last but not least: the counters will feature formation icons requested by so many players over the years!

Edgehill 1642: Is the King beholden to Parliament or is he truly sovereign? King Charles and his army, their way to London barred by the army of Parliament, have drawn up to give battle. Edgehill was the first major battle of the war. Robert Devereax, Earl of Essex, commands the army of Parliament sent to prevent the King's army from reaching London. The fighting is indecisive as the bloodied Royalist foot fall back, but Essex conceded the field despite receiving reinforcements. A major victory for either side could have ended the war here.

First Newbury 1643: Outmaneuvered, Essex, with the Royalists under King Charles between his army and London, is forced to fight. Essex spies a hill southwest of Newbury and in the early morning occupies it. Hedges line the area and help minimize the King's advantage in Cavalry. Essex’s stand on Round Hill stopped the Royalist and saved the rebellion.

Cheriton 1644: Sir William Waller’s Southern and Western Association Armies with the help of the London Trained Bands defeated Hopton’s Royalists in the rolling hills and hedges. The first in a series of victories in early to mid-1644 the signaled a turning tide in the war.

Cropredy Bridge 1644: Confident from his victory at Cheriton, Sir William Waller seeks to exploit a gap in the Royalist Main Army on the march. Waller divided his forces and attempted to trap part of the Royalist Army, but difficult terrain and quick reaction by the Royalists turned the tables and left much of Waller’s army trapped and he was given a stinging rebuke.

Marston Moor 1644: The largest battle of the war. It decided the fate of Northern England. An allied army of Scots under the Earl of Leven, the Northern Association under Ferdinando Fairfax, and the Eastern Association under the Earl of Manchester laid siege to the King's Northern Army under the Marquis of Newcastle at York, the key to the North. King Charles dispatched his nephew, the talented Prince Rupert, to affect a relief. The defeat was complete; the Royalist army was utterly destroyed and the North lost to Parliament. A new hero arose: Cromwell, a name inextricably linked with the English Civil War and the key player in the following two civil wars.

Second Newbury 1644: The disaster that precipitated the forming of the New Model Army. Three Parliamentary armies come together and catch the King by surprise just north of Newbury. The most unconventional of all the battles; the superior Parliamentary force attacks from either end, but is short on time. Various options on gaining more time by shortening the flank march give this action high replay value.

Naseby 1645: The debut of the New Model Army and the battle that broke the back of the King's army. The New Model Army was created by combining the elements of the major armies in the field. While this worked well for the cavalry, there were serious problems in the infantry ranks. The King's army was outnumbered, but it retained its corps of veteran infantry. The final result was a decisive defeat for the King and the end of his military fortunes. Though fighting would last another year, the King would never field a potent army again.

Nördlingen 1634: Though the Swedes struggled with command after the death of King Gustav II Adolf, they continued to exploit the momentum he had generated. A strong Swedish force pushed into Bavaria under the joint command of Duke Bernhard and Field Marshal Horn. The Habsburgs effected a union of forces with their Spanish cousins at Nördlingen, besieging the Protestant stronghold. The Swedes were drawn into a trap.

Wittstock 1636: The Cannae of the Thirty Years War. Field Marshal Banér had his lines of communication cut by an Imperial-Saxon army under General Hatzfeld. In a daring plan, Banér divided his numerically inferior force and launched a double envelopment. In a desperate struggle for Vineyard Hill, General Torstensson's cavalry held the line just long enough for General King's cavalry to make the march around the Imperial right flank.

Second Breitenfeld 1642: Field Marshal Torstensson caps a brilliant campaign with a siege of the Imperial fortress of Leipzig. Archduke Leopold commanding a larger Imperial army rushes to engage the Swedes. Within sight of the same ground of Gustav Adolf's greatest victory from eleven years past, the armies met. The Imperials had hopes for another Nördlingen, yet they got another Breitenfeld.
Jankau 1645: Field Marshal Torstensson launches a surprise winter campaign against the unprepared Imperial forces in Bohemia, catching the Emperor himself virtually unguarded at Prague. With all haste, General Hatzfeld is recalled and an army cobbled together to stop the Swedes. The armies came together in the wooded hill country southeast of Prague.