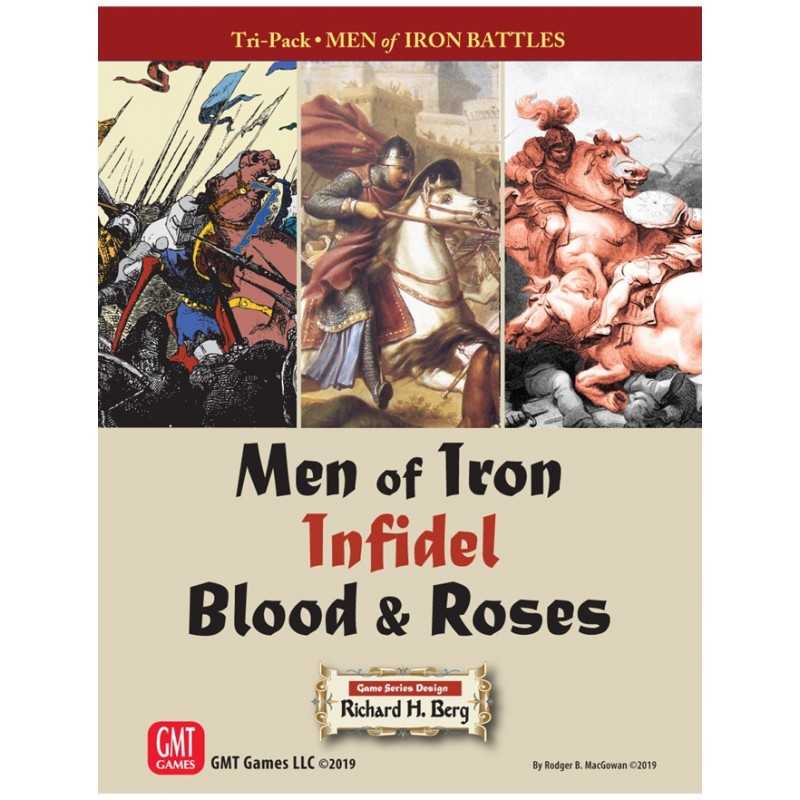 The first three games in the Men of Iron series: Men of Iron, Infidel, and Blood & Roses. But wait, that’s not all you get, we’re throwing in the Battle of Agincourt from C3i #22. 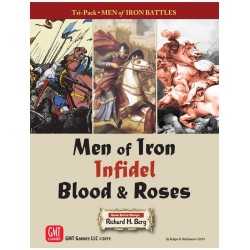 The first three games in the Men of Iron series: Men of Iron, Infidel, and Blood & Roses. But wait, that’s not all you get, we’re throwing in the Battle of Agincourt from C3i #22.

The game that started it all, Men of Iron, covers the re-emergence of infantry in the early 14th century, along with a more perceptive understanding of the value of combined-arms warfare and the effective use of defensive terrain. The scenarios highlight the key elements that made these battles so fascinating: the defensive power of the longbow, especially when used in coordination with dismounted, or even mounted, men-at-arms. Agincourt  covers Henry V’s famous victory during the Hundred Years War.

The second volume in the  Men of Iron series, Infidel, focuses on the major battles of the early Crusades era between Christians and the Muslims. This is a period that saw cavalry reign supreme and pitted the European mounted, armored men-at-arms - which relied on furious and direct charges with sword and lance - against the Eastern European/Turkish light cavalry tactics - focusing on the efficiency of its mounted archers.

Blood & Roses  focuses on the battles of the Wars of the Roses in England, between 1455 and 1487. This was warfare in which most men were truly "of iron", heavily and totally armored to such a point that their mobility was suspect. It also featured the introduction of gunpowder – mostly field artillery – in noticeable numbers. And while many English men-at-arms were mounted, they did so almost entirely for transport. Most fighting was on foot … and it was quite vicious.

There will be a series rulebook, with a few rules still applying only to a specific game, and the games will have all errata applied to their battle book. The color setups a la Blood & Roses and Arquebus will show up in all battle books. Men of Iron will see some battle changes, a few of which will involve new/changed counters.

The series is designed for quick learning and easy play. Game rules are short, there are no turns - play is continual, with opportunities to steal play from your opponent - and combat resolution is a single dieroll. Playing time is about 1-to-3 hours per battle.

The series is also for the gamer who enjoys playing solitaire. The system is designed for both individual and face-to-face play without any loss in insight or fun. It allows a player or players to see what happened in these famous battles and why. There are no purpose-built solitaire rules, but many players play that way.

The battles included in the Men of Iron tri-pack are:

Dorylaeum – Northwest Anatolia, 1 July 1097 - The Crusader line of march, including the people’s Crusade and Peter the hermit, as well as all the great 1st Crusade Leaders, are “ambushed” by Kilij Arslan and his crack Seljuk cavalry.
Antioch – Northern Syrian, 28 June 1098 - The exhausted, starving and depleted Crusaders – they had few horses left – have just taken Antioch and are now faced with a large Turkish army, under Kerbogha, sent to retake the city.
Ascalon – Southern Palestine, 12 August 1099 - The Crusaders, having seized Jerusalem, turn south to fend off the suddenly active large army of the Fatimids, with their crack Mamluk heavy cavalry.
Harran – Crusader Kingdom of Antioch/Edessa, 7 May 1104 - Baldwin II of Edessa seeks to maintain control of his little kingdom in northern Syria, something Soqman, Atabeg of Damascus, is not happy to allow. One of the first major Crusader defeats.
Montgisard – Frankish Kingdom of Jerusalem, 25 November 1177 - Saladin attempts to destroy a small army from the Kingdom of Jerusalem with an army more than five times its size. Though there are only 400 knights, the Crusaders are led by the remarkable Baldwin IV, The Leper King. The outcome - one of the greatest Crusader victories. See if you can carry off this stunning upset!
Arsuf - Ayyubid Kingdom of Jerusalem, 7 September 1191 - The classic battle between Richard I Lionheart and the Ayyubid Army of Saladin highlighting the major facets of each army in an unusual moving battle.
Falkirk - Scotland, 22 July 1298 - Wallace's great disaster, despite his massive schiltron. Good infantry is fine, but it needs support. The ultimate solitaire scenario.
Courtrai - Flanders, 11 July 1302 - The Battle of the Golden Spurs. The Flemish shook the elite French army with one of the earliest displays of the power of solid infantry using defensive positions.
Bannockburn - Scotland, 23-24 June 1314 - Robert the Bruce's famous triumph over a numerically superior, but literally bogged down English army.
Crecy - France, 26 August 1346 - The first great battle of the Hundred Years War. It showed that infantry, supported by archers, could defeat the best knights in Europe.
Poitiers - France, 19 September 1356 - The French fight dismounted this time and almost win. But the longbow, and solid English infantry prevail again.
Najera - Castile, 3 April 1367 - The Black Prince goes to Spain with a marvelous combined arms force to further English plans of "expansion".
Agincourt – Artois, 25 October 1415 – Henry V wins a mighty victory against the flower of French chivalry.
1st St. Albans – Herefordshire, 22 May 1455 - Marks the first major engagement in the Wars of the Roses. Richard, Duke of York and his ally, Richard Neville, Earl of Warwick, defeated the Lancastrians under Edmund, Duke of Somerset, who was killed during the battle. York also captured Henry VI and forced Henry to appoint him Constable of England
Blore Heath – Staffordshire, 23 September 1459 - Greatly outnumbered Yorkist infantry used the longbow and a defensive position to drive off the Lancastrian Men-at-Arms.
2nd St. Albans – Herefordshire, 17 February 1461 - The Lancastrians drove the Yorkists out of the town and then destroyed Warwick’s strangely deployed army, even when sturdily defended by hedges, caltrops and spiked netting.
Towton – Yorkshire, 29 March 1461 - Easily biggest battle in the box and the biggest in the entire series. It uses over 200 combat units and, much like the actual battle, will probably take a long time to play. It is mostly crash and bash, with little room for maneuver, all fought in a blinding snowstorm!!
Barnet – Greater London Area, 14 April 1471 - A classic battle of planned deployments, but overlapping wings, cries of treason in the lines, fog of war (actual fog), and the excellent use of reserves.
Tewksbury – Gloucestershire, 4 May 1471 - A battle that shows one of the key terrain features of the battles in this era, extensive hedges and thick underbrush in otherwise clear fields.
Bosworth – Leicestershire, 22 August 1485 - The best-known battle of the wars and the tragic (I think) death of King Richard III in a battle he should have won. Using the latest information as to where the battle took place, let’s see if you can cancel out the Tudor dynasty.

Infidel, Blood & Roses, and The Men of Iron Tri-Pack developed by Ralph Shelton.