Death in the Trenches 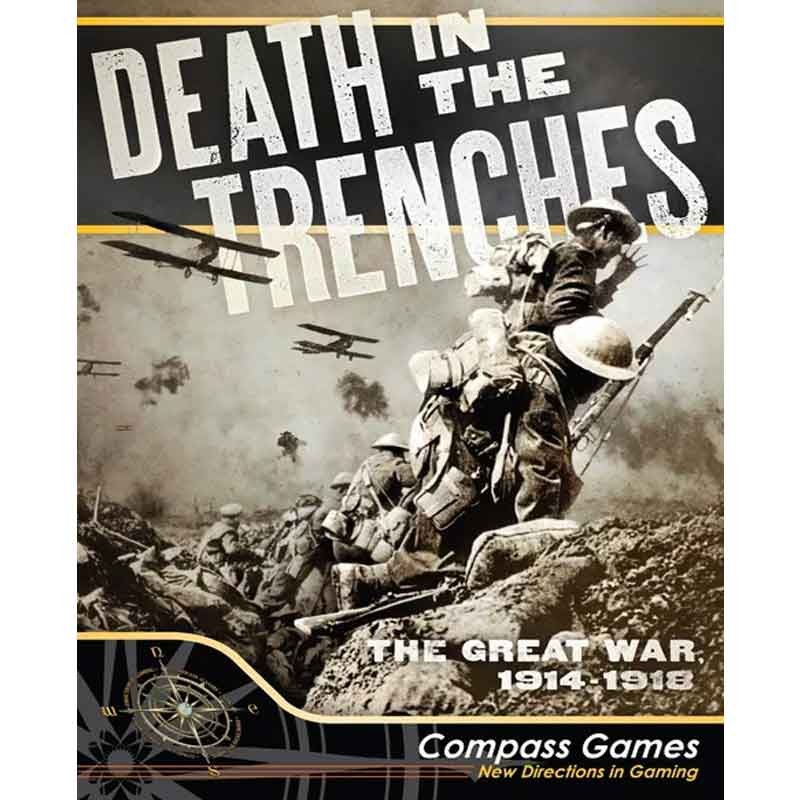 DEATH IN THE TRENCHES includes a 28-page rulebook (and an additional 20 pages of setups and random events) detailing the game's unique combat system (no CRT!) which portrays the grinding nature of World War I combat in a realistic way that still gives players plenty of options to pursue. Using army-level units (which contain numbers of divisional level formations, represented off-map), players use numerous special military abilities to drive back the enemy.

"DEATH IN THE TRENCHES" is a strategic-level World War I wargame covering the entire war, from the opening shots in Serbia and Belgium to the final defeat -- or victory! -- of Germany and Austria-Hungary in 1918. The game includes a map illustrated by Jonathan Carnehl, stretching from the Pyrenees to Moscow, and from Norway to the Sudan, covering every square inch of territory in Europe and the Near East which saw combat from 1914 to 1918, in a manageable 34x22" format. An additional map shows the German colonies

The game also features 520 beautifully-illustrated counters depicting the national armies that fought in the war -- from the Germans, French, British and Russians all the way down to the Persians, Montenegrins, Armenians, South Africans, and a host of other specialized units (French Foreign Legion, Gurkhas, Italian "Arditi", Cossacks, Tyrolean Kaiserjaeger, Zionists, Bavarians, "Dunsterforce"... even the Chinese may send a small expeditionary force).

Detailed random events rules give you more gory details about World War I than you've ever seen before in a game, while helping keep play simple and straightforward. Lenin, the Senussi revolt, intrigue in the Romanian court, the Cruise of the Emden, the Armenian Massacre, the Sinai Pipeline, the Ukrainian Reactionary Hetmanate, Rasputin, Mata Hari, the Russian shell shortage, the murder of Edith Cavell, Wilhelm Wassmuss (the "German Lawrence"), Lawrence of Arabia, the Nestorian resistance, Pancho Villa, the Grand Duke Nicholas, Thomas Masaryk, the Red Baron, Czech Legion, Irish Rising, Berber Revolt, air raids, typhus, influenza... they're all here.

It sounds like a massive game, but it isn't. DEATH IN THE TRENCHES is designed to be played--easy to play, hard to master. You'll learn things about World War I you never knew before, and you'll have to face the same crises the leaders of the Entente and Central Powers did. Think you can do better than Douglas Haig and Robert Nivelle? Now it's your turn.

The 2021 edition takes this WW1 classic to new heights, and features a revised and expanded combat system that preserves the charm of the original but is much more faithful to actual WWI battle numbers and provides much more detail on individual countries' distinctive military strengths and weaknesses. Each individual battle now takes place on an off-map display that simulates a real WWI battle, each battle opening with a "spearhead" force that drives into a "target area". The system of entrenchment remains simple and easy to play, but takes into account the role of time and manpower in creating different levels of trench effectiveness.

Added detail includes the Hindenburg Line, German siege guns, and the possible flight of the French government. Instability in the Balkans, and the allegiance of the Roumanian and Bulgarian governments, may lead to unexpected political reversals in Europe's turbulent "backyard". The impact of the Russian Revolution is expanded, with several possible directions for Russia to travel including the rise of a better Czar, or even the takeover of Soviet Russia by Trotsky, which could bring Russia back into the war!

The system of military reinforcements has been transformed, with greater reliance on historical unit production and manpower. Great Power support and sponsorship for minor country forces has been made a vital part of the game, and the "major minors" like Serbia, Romania and Bulgaria now have their own Army Reserves which give each country a more distinctive role.