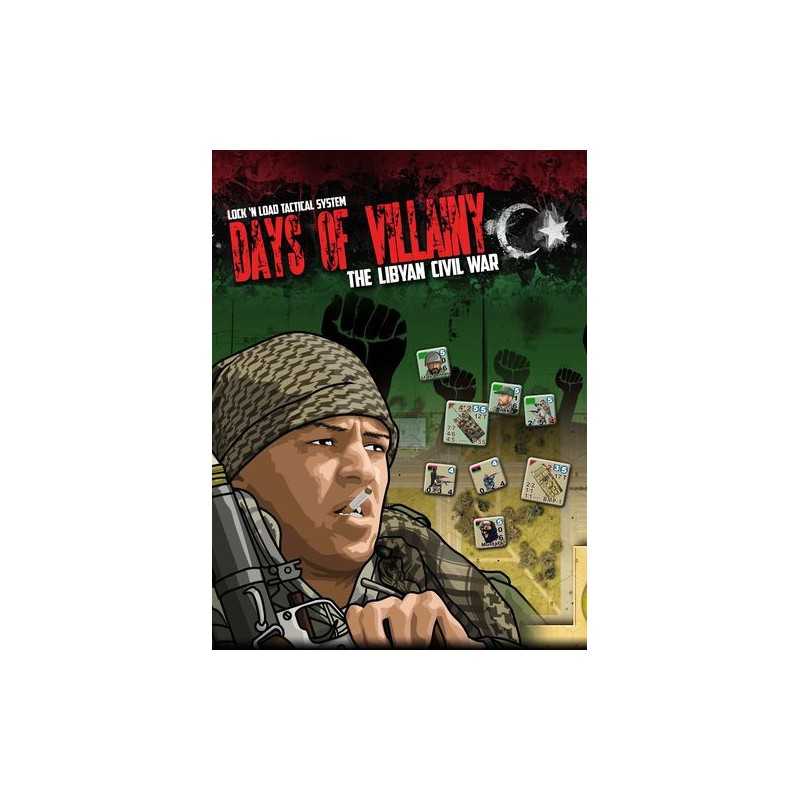 Days of Villainy is a expansion that can be played with ANY core/base games of the Lock 'n Load Tactical series. Days of Villainy depicts four of the fierce battles that occurred during the Libyan Civil War, including Colonel Gaddafi’s final epic confrontation.

In March of 2011, Libyans in opposition to Colonel Muammar Gaddafi and his government took up arms. For eight months, the opposition, fighting under an interim governing body, the National Transitional Council (NTC), fought Colonel Gaddafi’s Loyalist forces all across the country. In October, during a fierce battle in the coastal city of Sirte, Gaddafi was captured and killed.

Days of Villainy is a expansion that can be played with ANY core/base games of the Lock 'n Load Tactical series. Days of Villainy depicts four of the fierce battles that occurred during the Libyan Civil War, including Colonel Gaddafi’s final epic confrontation. Both sides are loaded for bear, armed with RPG-7s and FN MAG and PKM machine guns. The Loyalists have the armored support of BTR-60s and T-55s, but the NTC rebels have plenty of well-armed Technicals to drive into battle, as well as KPV heavy machine guns and the aid of seasoned fighters from the Katiba Tiger and Al-Saiqa commando brigades.

• Hold or Die: An armored column of Loyalist forces attempted to retake the vital oil hub of Marsa al-Brega, on the road to Benghazi. A tough fight was ahead of them, and the sun was setting.

• On the Road to Sirte: A convoy of NTC rebels and Al-Saiqa commandos tasked with delivering ammunition to Harawa was ambushed by a small force of Loyalists. Despite the initial blasts of roadside mines, the remnants of the convoy had to push through.

• Assault on Bab Al-Aziziya: In late August, NTC rebels entered Tripoli. Many neighborhoods were easily taken, but the Bab Al Aziziya compound, symbol of Gaddafi’s contemptible regime, was still intact. The compound had become a fortress that had to be taken.

• Game Over: On October 20th, 2011, an American Predator drone identified a Loyalist convoy leaving the city of pro-Gaddafi stronghold of Sirte. The drone and French aircraft in the area attacked the convoy, and NTC rebels in the sector closed in on the commotion. Little did they know that Gaddafi was a passenger in the convoy. The stage was set for a vicious, climatic battle.

Lock ʼn Load Tactical: Days of Villainy is an expansion that can be played with ANY complete Lock ʼn Load module.