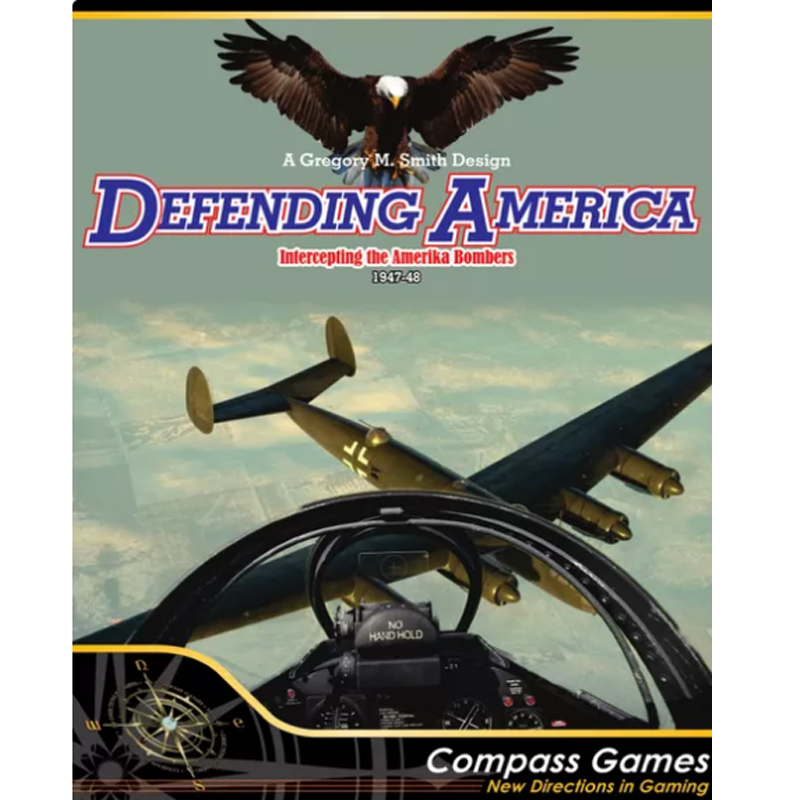 Defending America is a solitaire, tactical level game which places you in command of an actual or experimental interceptor aircraft during a frightening look at what might have been in World War II.

Descripción del juego
Each turn consists of one sortie, during which the player will fly a mission to intercept Amerika Bombers which are en route to bomb the mainland of the United States. As the player progresses, he may choose to upgrade to even more advanced interceptors in this alternate history game. It builds a strong narrative around the pilot as you look to earn skills, rise in rank through promotion, receive awards and survive a dangerous year above the Atlantic Ocean and America.

The objective of the game is to conduct numerous sorties in the role of a interceptor pilot and rack up as many bomber kills as possible, with a special emphasis on preparing to stop atomic attacks. Pilots may use the experience gained to improve their odds of success by purchasing skills. Awards and technological advances via use of the technology track help to narrate the player's eventual goal – to become the “Scourge of the Amerika Bombers” and end the threat to the United States from the air.

Game play moves quickly, following a set sequence of events that are repeated until the end of the game. Once you have your initial pilot along with your assignment, play proceeds by taking off when the enemy bomber force nears, then checking to intercept them before they get a chance to bomb a multitude of targets on the mainland United States. Combat consists of interception from your U.S. carrier or land-based aircraft, depending on where the player is currently located, then intercepting one of six historically modelled (albeit hypothetical) Amerika Bombers. After interception, landing operations occur, with the weather playing a factor again as part of the landing procedure. When the mission is completed, you will ascertain if any awards have been earned or Experience points gained prior to you next sortie. Here you can also spend Experience points if desired to gain skills and may request a new interceptor type if one is available. You will repeat this process by going to your next sortie until shot down and killed, or until the end of March 1948, should you make it through unscathed.

While Defending Amerika is designed as a solitaire gaming experience, additional options for play are provided for both multi-player cooperative and competitive gaming sessions, and an option to link the game with Amerika Bomber: Evil Queen of the Skies