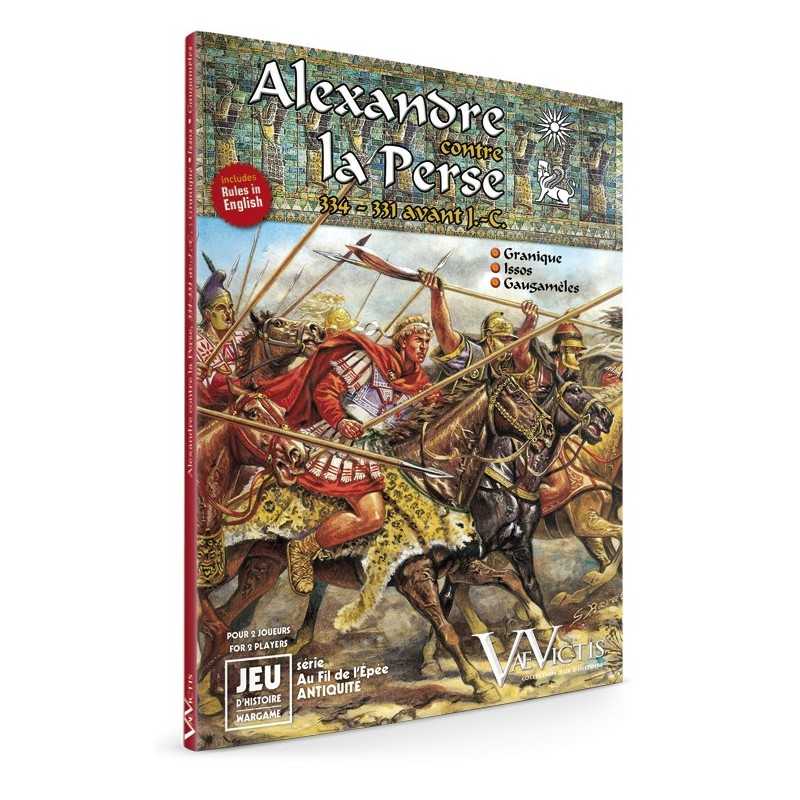 
 
Idioma: Ingles Dependencia del lenguaje: Alta Frederic Bey
Juegos de mesa divertidos Importación Dependencia idioma: poca 2 jugadores Wargames
Alexander against Persia is a tactical game which presents the first 3 battles in the By the Edge of the Sword Antiquity series. They bring onto the stage the greatest conqueror of Antiquity in the course of the mighty confrontations which enabled him to bring Persia to its knees.

Alexander against Persia is a tactical game which presents the first three battles in the "By the Edge of the Sword Antiquity" series. They bring onto the stage the greatest conqueror of Antiquity in the course of the mighty confrontations which enabled him to bring Persia to its knees.

GRANICUS - In 334 BC, after crushing a revolt by the city of Thebes, the young King Alexander of Macedonia turned toward the east and set out on his conquest of Asia. He crossed the Hellespont with 35,000 men. On the banks of the Granicus River he came up against an army of 40,000 men commanded by Memnon, a Greek who was in the pay of Persia. Thanks to a vigorous attack by his Companion cavalry, Alexander succeeded in dispersing the enemy horsemen and crushing Memnon’s Greek mercenaries. This brilliant victory opened the door to Asia Minor.

ISSOS - A year later on the coast of Syria the King of Kings, Darius III, determined to assemble a great army and intercept Alexander. The two armies met at Issos. While repelling an attack on his left by the Persian cavalry, Alexander and his right wing charged across the river under a rain of enemy arrows. By hurling himself into a breach on the Persian left flank, Alexander brought about its collapse and the flight of Darius. The Macedonian phalanx advanced inexorably in the center of the battlefield and completed Alexander’s victory, with the result that he could go on to invade Egypt unhindered.

GAUGAMELA - The final clash between Alexander and Darius took place at Gaugamela in 331 B.C. The King of Kings had mobilized impressive forces from the eastern part of his empire. His army, unusually numerous, included elephants as well as war chariots. He compelled Alexander to fight in a vast plain where the 40,000 Macedonians risked being encircled. Once again the king of Macedonia opened the battle with a cavalry attack on his right. The phalanx meanwhile suffered severely from Persian attacks, especially on its left wing where Parmenion was in command. Alexander nevertheless forestalled the enemy by making Darius himself the target of the Companions’ charge. Once they had opened a breach, the Macedonian cavalrymen passed through it and struck the Persians from the rear, causing them to rout. This occurred in the nick of time, because Parmenion’s contingents were by then on the point of breaking. Darius fled in the direction of Arbela. Alexander caught up with him, but by then he was already dead, assassinated by a group of his generals.

Alexander against Persia puts the players either at the head of the Macedonian army, at whose core the cavalry and the phalangites played complementary roles, or in command of the Persian army, consisting of highly varied troops collected from all over the empire. The three battles were increasingly important chronologically, in terms of the numbers involved and their complexity. Will you, as Alexander, be able to bring down a multi-national army by means of only three battles? Will you, in the role of the King of Kings, succeed in foiling Alexander’s maneuvers and vanquishing the Macedonians?